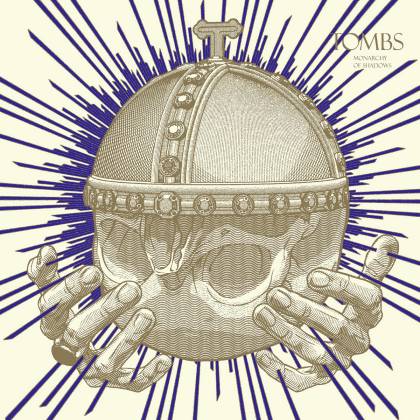 TOMBS is a unique musical beast that forges black metal, sludge and post metal. The New Yorkers, led by ringleader Mike Hill, are a force to be reckoned with due to their songs' melodious and atmospheric passages, memorably delivered with sheer, brute force. A lot has changed within TOMBS' ranks since the band's 2017's full-length album, "The Grand Annihilation". With an entirely new lineup in tow — Hill is now joined by bassist Drew Murphy, drummer Justin Spaeth and guitarist Matt Medieiros — TOMBS returns with the compelling and invigorating EP "Monarchy of Shadows".

Frenetic, lively and grandiose black metal colors the EP's six tracks. "Monarchy of Shadows" references the brooding, down-tempo nature of "The Grand Annihilation" at times; however, there is a more visceral, fast, full-frontal assault this time around that finds the band continuing to grasp at an ethereal spirit. An almost cinematic opening that's ripe with a frigid essence sets the stage on the opening song, the release's title track, before it settles into a strong militant rhythm.

The next track, "Once Falls the Guillotine", also begins with a spellbinding opening that's gargantuan and spacious, whilst clearly laying the stage for the onslaught that immediately follows: an explosion of manic and blasting black metal mayhem. Rage and venom spew from Hill's mouth via his raspy vocals, constituting the primary mode of narration, while deep, dramatic crooning augments the band's more brooding moments. "Necro Alchemy", meanwhile, posits mid-paced percussive pummeling against frigid tremolo picking in what amounts to a tug of war that renders an exhilarating effect. Midway through the song, chugging riffs spice up the festivities and even merge into a chunky riff that slows down in a manner that's, surprisingly enough, analogous to the kind of breakdown that one would hear on a slam death metal album.

There is something very refreshing about this incarnation of TOMBS. Hill's new lineup has injected a new sense of vitality, with a slightly more dynamic sound. Sure, there is fresh blood, but it all flows within TOMBS' body in a way that is fluid and consistent with Hill's core vision. On the downside, Spaeth's skillful drumming can at times feel redundant in delivery, but on the flip side, it enhances the album's transcendental and almost hypnotic nature. The EP is definitely a new era for TOMBS, a period of rebirth, if you will. The associated imperfections are understandable, then — and even quite charming. TOMBS continues to be a savage, passionate act that's walking its own path, one that's even more adventurous than before.