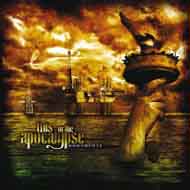 THIS OR THE APOCALYPSE

I'm usually lukewarm about tech-y metalcore albums and lord knows there has been an avalanche of them the past few years. But Lancaster, Pennsylvania's THIS OR THE APOCALYPSE kept my interest long enough to realize that they've harnessed a convincing sound and may be sailing on to bigger and better efforts. If nothing else, "Monuments" is a tough little sucker that is anything but subtle.

That toughness comes mainly from the band's philosophy of musical execution (dubbed "Thinking Man's Mosh"),which would seem to involve three primary elements: Attack, attack, and then attack some more. Save for ethereal piece "Memento Mori", every song on the album flows like a Gatling gun. The fast paced tunes are usually propelled by angular time signatures (ala MESHUGGAH) and staccato drumming with stabbing riffs and the bark of vocalist Ricky Armellino. The production of Carson Slovak (CENTURY) is a primary reason for the album's in-your-face sound; he's done a great job with the taut and punchy drum sound and making those precision riffs jut out. Slovak is also responsible for the fantastic, politically charged artwork.

This is not to imply that the songs are not without melody, but those melodies are derived from the guitar harmonizing, rather than any kind of recognizable hooks or tuneful vocal patterns. The album is listenable because of the way the songs are arranged, but that does not mean that most will easily identify individual tracks, which is the only real issue with the disc; not a major issue, mind you, but an issue nevertheless.

With a songwriting style that is more unconventional than technically overdone, yet rife with floating melodies, fans of bands like MISERY SIGNALS and SHAI HALUD will no doubt dig it. "Monuments" hits like a ton of bricks and is possessed of a certain power that keeps it from becoming too monotonous. Not recommended for the meditative listener.