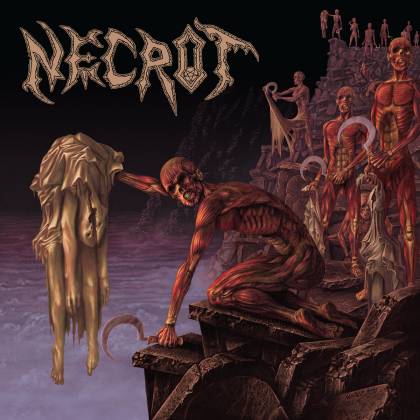 NECROT followed a series of now revered demos with their debut album, "Blood Offerings", one of 2017's breakout death metal albums. Now, in 2020, Oakland's beastly purveyors of punk-fueled death metal have returned. NECROT's sophomore, full-length album, "Mortal", finds the Californians realizing a potential that their debut suggested was possible. And if the proverbial ball bounces right for them career-wise in terms of continued, growing recognition, the release will possibly establish the act as one of the leading figures of modern death metal. In any event, on a purely creative and artistic level, "Mortal" is absolutely riveting from front to back, a tour de force of timeless, gritty death metal.

"Blood Offerings" was an absolute banger of an album, and their name has been further established due to the strength of their feral live performances helmed by charismatic front man Luca Indrio (also of VASTUM). Somewhat recently, they proved their worth as a tour opener for genre giants CANNIBAL CORPSE and MORBID ANGEL, outshining fellow upstarts BLOOD INCANTATION in the process. But hindsight is 20/20, and looking in the rearview mirror, it's evident that while "Blood Offerings" had impact and bite, the songs weren't significantly memorable. Now, with the stage set and all eyes on NECROT, the trio delivers in the grandest way by delivering infectious, catchy songs with relative but notable depth.

"Your Hell" sets the tone with a grandiose introductory passage a la IMMOLATION and bleeds forth like a rabid beast unleashed. Sonny Reinhardt's (of SAVIOURS fame) winding riffs are standard but delicious. His solo in "Stench of Decay" mellifluously flows tastefully on its own and it makes sense within the context of the song, rather than being a hodgepodge of notes as the case can be with tech-obsessed death metal bands, as well as with the "cavernous" bands that are the flavor of the day. "Sinister Will" capitalizes on a thrashing riff propelled by Chad Gailey's hard-hitting percussive attack. His impressive stamina, fluid fills and machine-like double bass work shines throughout "Mortal". The concluding, title track is a marathon that exceeds eight minutes, and it's unfortunate that it doesn't run longer. The wandering, brooding track entails an appealing spacious quality that drifts toward psychedelia.

They've pushed themselves as musicians and have remained mindful of coloring the canvas more, offering increased dynamics while not straying from raw death metal's path. The chops certainly seem to be in tow for them to become a progressive death metal band, but it's good that they didn't choose to do so. Nothing is wrong with prog death, but NECROT's identity and magic would have been lost. Like their death metal and heavy metal heroes, the prime goal seems to be songwriting rather than a fruitless competition to be the most brutal and/or technical. An obvious reference point is AUTOPSY, yet they are far from being a clone band. Instead, NECROT seems inspired by that classic band's spirit and purpose more than anything. Indeed, if there's a band carrying that spirit's torch on a large scale, it's NECROT.