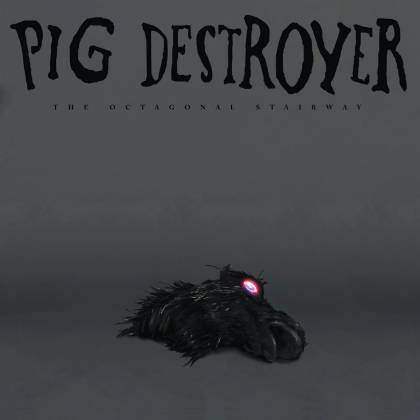 PIG DESTROYER rejoins us with a brief but belligerent EP, following 2018's full-length "Head Cage". With "The Octagonal Stairway", the legendary American grindcore act divides 25 minutes of frantic, unsettling grind into six songs. The grind purists who bemoaned "Head Cage"'s much more diverse stylings are offered enough cutthroat grind to make them bite their tongues until they bleed. "The Octagonal Stairway" is indeed an icepick to the eardrums, but it's also reflective of the nuanced and impressively dynamic band they've grown into.

The depth of sound has increased tremendously since the one-time trio has grown to include Blake Harrison (electronics) — who has been with the band for nearly 15 years at this point — and bassist Travis Stone, who replaced their initial bass player John Jarvis. The sound isn't just obviously and desirably thicker, the songwriting capacity has expanded exponentially, and PIG DESTROYER is making the most of it. "The Octagonal Stairway" is essentially a nod and wink back to the primitive days of "Explosions in Ward 6" and "Prowler in the Yard" as well as a bridge to the more eclectic future they've been growing toward in recent years.

The first half of the release is a display of tried-and-true PIG DESTROYER by way of tempo-shifting grind that's as subtle as a barroom brawl. The title track is an abusive song that's followed by "The Cavalry", a track that's even more aggressive. "Cameraman", meanwhile, exploits the sense of head-nodding groove that guitarist Scott Hull first began to truly focus upon with 2007's "Phantom Limb". The song also touches back to the band's longstanding appreciation of classic thrash.

The latter half of the EP is a collection of B-side noise tracks. This is where some grind heads may tune out, but for those who have appreciated PIG DESTROYER's development, the bizarre songs offer enough meat to chew on, meriting multiple listening sessions. "News Channel 6" is an interlude at best, serving little value to the release, but "Head Cage" and certainly the 11-minute-long "Sound Walker" are hypnotic industrial noise pieces that are almost instantly captivating.

"The Octagonal Stairway" seems to be a stopgap release designed to tide fans over between full-length albums. Whatever the case may be, it's a solid burst of grind and noise that rips through the various styles that PIG DESTROYER has come to encompass over the years. Vocal critics are likely to continue the expected online bashing, but whether or not modern-day PIG DESTROYER is one's cup of tea, it sure as hell sounds as though they are writing and performing with conviction and passion.