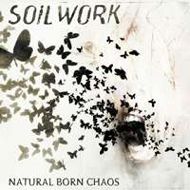 Arguably one of the year's most anticipated “underground” metal releases, SOILWORK's Natural Born Chaos has turned out to be a boldly experimental effort for the Swedish outfit, with the group stripping away some of the unadulterated aggression that characterized their earlier releases in favor of a substantially more melodic approach. Of course, much of what has made the band's A Predator's Portrait album such a memorable effort is still in place, and there are plenty of incredible riffs and breathtaking musical passages on the offer that are certain to please lovers of the Swedish melodic death metal approach. However, SOILWORK's songwriting is now much more refined and revolves far more around huge, melodic choruses (i.e. “Song Of The Damned”, “Mercury Shadow”) than was ever the case on the group's past releases. How much of that is due to the involvement of STRAPPING YOUNG LAD mainman Devin Townsend (who also contributes lead vocals to “Blackstar Deceiver”) is open to speculation, but one thing is certain: SOILWORK have never sounded quite as ready for mass domination as they do here—from the production all the way down to the vocal work, which is by far and away the best we've yet heard from Bjorn "Speed" Strid.

If I have one glaring criticism of Natural Born Chaos, it's simply that the songs' melodic sections appear to have diluted some of the intensity that was previously present in the group's songwriting approach—a seemingly inevitable consequence of the band's natural musical evolution. This aside, SOILWORK have delivered an excellent album that is certain to rank as one of the year's finest.