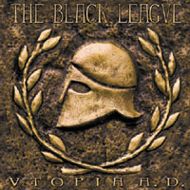 The brainchild of former SENTENCED frontman Taneli Jarva, THE BLACK LEAGUE are a much less commercial entity than the singer's former outfit, a partial consequence of Jarva's relatively one-dimensional vocal delivery, which clearly takes away from the rest of the group's otherwise colorful instrumental efforts on this, the band's second full-length CD. Whereas his former bandmates have seemingly taken a page out of METALLICA's book and created a sound and style that owes a substantial debt to the latter act's post-“Black Album” releases, Taneli appears to be much more versatile in his songwriting approach, if not in his vocal abilities, with many of Utopia A.D.'s cuts rooted in the kind of dynamics and non-metal overtones that indicate an impressive breadth of musical influences.

Playing a style of music that defies categories or labels, THE BLACK LEAGUE are in dire need of a vocalist who will be able to capitalize upon the group's versatility and non-formulaic delivery, and in Jarva, they have someone who appears to be the exact opposite—a singer with a gravelly, throaty approach that is as much of an acquired taste as they come. It's shame, too, because the quintet are clearly in possession of a relatively unique sound that shares with its Finnish counterparts a penchant for mixing traditional rock'n'roll influences with less conventional ideas, a factor that keeps the group's material interesting despite their frontman's obvious shortcomings.

Occasionally, THE BLACK LEAGUE manage to overcome the above-mentioned flaws by delivering the kind of hooks that would not sound out of place in the hands of a band like Jarva's former combo, such as in the instantly-memorable “To Suffer And To Smile”, which is the most immediate cut on the offer. For the most part, however, THE BLACK LEAGUE coast along without ever succeeding in fulfilling their musical potential, in the process falling short of the standard set by many of their peers.