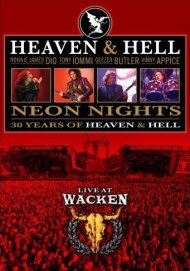 It has been thirty years since the release of BLACK SABBATH's landmark album "Heaven and Hell", the first with vocalist Ronnie James Dio (RAINBOW, ELF, DIO) and a turning point in both the band's career and the direction that heavy metal would take in the '80s. The equally brilliant, heavier/darker "Mob Rules" complete a pair of all-time classic and definitive Dio-era SABBATH albums. Most know what came next with "Live Evil" and the longer period that followed before Dio, guitarist Tony Iommi, bassist Geezer Butler, and drummer Vinny Appice collaborated again on 1992's "Dehumanizer" before yet another false floor would give way. Fast forward to 2007 and fans were treated to "The Dio Years", which included three new tracks and ultimately led to the first full-length album of new material from the foursome in 17 years, HEAVEN & HELL's "The Devil You Know". It is quite a legacy, the DIO discography included, and in any other circumstance, the release of HEAVEN & HELL's "Neon Nights" on DVD and CD would have served as cause for uninterrupted celebration and hope for the next chapter of the aging veterans' ever fattening book of heavy metal. But that celebration was interrupted and hope for a continuation of the saga dashed as Ronnie James Dio succumbed to his cancer on May 16, 2010.

One can also look at this live document of HEAVEN & HELL's performance at the Wacken Open Air festival on July 30, 2009 as the ultimate tribute, one that gives fans one last glimpse at the greatness of Ronnie James Dio, a man that many call the greatest heavy metal vocalist of all time. Even those that disagree would only qualify that statement by noting his membership in an exclusive club of vocal icons, including Rob Halford and Bruce Dickinson. Dio's voice had held up very well and he is heard here belting out the classics with a passion, energy, and precision that would have put most singers half his age to shame.

This night was of course about more than Ronnie James Dio and the performances of Iommi, Butler, and Appice, as well as hidden keyboardist Scott Warren, were dead on as well, although Vinny has lost a little crispness over the years and the crackling fills that gave songs like "The Mob Rules" an extra kick in the ass aren't as powerful here. Regardless, the sound is excellent and song selection notable for how well new cuts like "Bible Black" and "Fear" sit amidst staples like "Children of The Sea", not to mention "Dehumanizer" cuts "I" and "Time Machine", the latter two aging better than most would expect. In addition to fan favorite and final encore "Neon Knights", and a song in "Die Young" that sounds even more impressive 30 years later, it is the inclusion of the infrequently played "Country Girl" (the first encore track) and the monstrous, often overlooked "Falling off the Edge of the World" that are the real treats. Both tracks are taken from Side B of "Mob Rules", the latter featuring that swarming riff that still makes all those tiny neck hairs straighten up and break off. Of course, no Dio-led performance would be the same without a marathon-length rendition of the title track from "Heaven and Hell" and this version played at the Wacken gig does not disappoint. Fans may also opt to purchase the CD version of the gig, one that leaves off intro "E5150" and "Country Girl".

The DVD package rounds out with informative interviews with all four members, each led down a similar path by the interviewers, starting with the formation of BLACK SABBATH 2.0 and ending with the release of "The Devil You Know". Brief Dio tributes from Iommi, Butler, and Appice are also included. As a package, "Neon Knights: Live in Europe" is worth the cash for any fan of BLACK SABBATH, HEAVEN & HELL, and/or Ronnie James Dio, provided you're not an extras junkie. If nothing else, it is a testament to Dio's iron will and complete devotion to the music of heavy metal and the man's legion of followers.