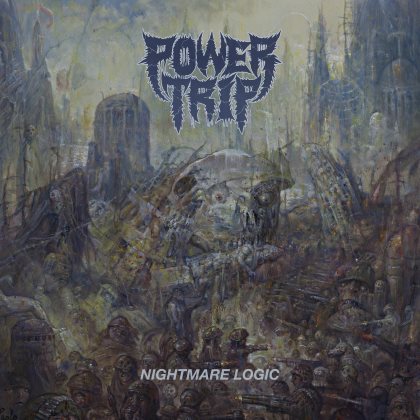 POWER TRIP had a split with INTEGRITY last year, and it had a few EPs and other releases, but it has remained consistent, stripped down, in your face and memorable since forming in 2008 in Dallas, Texas. Its brand of linear, simplistic crossover references the style's glory days in the eighties. Here it rumbles forth with a hardcore two-step stomp that infectiously causes heads to nod in the mosh pit at thrash and hardcore shows and beyond.

With the band's sophomore full-length, "Nightmare Logic", POWER TRIP has somehow cutout the fat that seemed unnoticeable on its 2013 debut, "Manifest Decimation". The ripping, squealing solo on "Firing Squad" reinforces the unit's old-school thrash aesthetic. The title track's tempos straddle the fence between SOD-style thrash and contemporary hardcore, and is driven by the dual guitar attack of Nick Stewart and Blake Ibanez. The duo shine on the simmering and boiling riff attack of the religion critiquing number "Crucification", a track that brings to mind the spirit of traditional metal as well as EXODUS's early material.

Riley Gale's delivery is relatively monotone yet unspeakably passionate, a throaty roar laden with an unmistakably Lemmy-like snarl. Musically, the group tastefully merges the band's party friendly sensibilities with vicious vitriol. Without mockery, there's a sense of campy eighties kitsch, a rebellious middle finger to "the man," proving the band doesn't take itself too seriously. Yet, this sensibility is perfectly balanced with Gale's earnest socio-political commentary, which couldn't be any more apropos with America's current political climate, as with "Waiting Around To Die", "Ruination" and "If Not Us Then Who".

"Nightmare Logic" isn't more of the same. POWER TRIP has become a better version of itself.