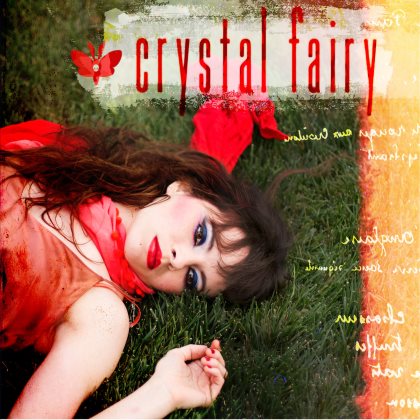 The notion of a side project suggests that a band is secondary to its members' "main" bands. Another semantic spin, "supergroup," is more prestigious, assuming that the band's component members are involved with notable acts within their given genres. Whatever the case may be, such acts typically fall short of the high expectations fans and critics lasso onto these newer musical entities.

Enter CRYSTAL FAIRY. The ensemble is pieced together by cult band MELVINS's main members, Buzz Osborne and Dale Crover, no strangers to collaborative efforts, along with Omar Rodriguez-López, core member of THE MARS VOLTA and AT THE DRIVE IN, and Teri Gender Bender of LE BUTCHERETTES. For those familiar with said artists, CRYSTAL FAIRY offers few surprises, but that isn't a bad thing here. With the band's eponymous debut, the sounds, styles and subtleties of the aforementioned bands and artists are smoothly synthesized into a whole that celebrates the members' hallmark abilities and tendencies.

Never mind that the MELVINS doesn't abide by any rulebook, the members' side projects and collaborative efforts are exponentially more unrestrained and free in form and delivery. Ironically enough, then, the more consistent expressions of Osborne and Crover's main band's bare-knuckled moments are tapped and stand as the backdrop for Gender Bender's expansive vocal capabilities on CRYSTAL FAIRY's debut. Indeed, for all the members' wild, unconfined talent, for which they're typically known, this release is relatively straight forward in comparison. That isn't to say, however, that the music is safe.

Gender Bender steals the show with a more tempered approach than she's known for with her more unhinged LE BUTCHERETTES attack. Her voice cascades fluidly between moods that are pensive, brooding and vulnerable to those that are eccentric, joyous and maniacal. In any context, Bender's contributions are always fitting and intertwined within the fabric of the band's hard rocking, almost sludge aesthetic. It's a sound that pays fewer dividends when wielded with slower tempos compared to its more charging efforts, like album opener "Chiseler" as well as the album's stomping closer "Vampire X-Mas". This number vocally sounds like a marriage of Osborne and DEAD KENNEDY's Jello Biafra set to the backdrop of MELVINS' chant-worthy, hook-laden hard rock numbers.

CRYSTAL FAIRY has exceeded expectations on its debut, and hopefully the gang doesn't put this band on the back burner for too long in favor of their main projects' activities.