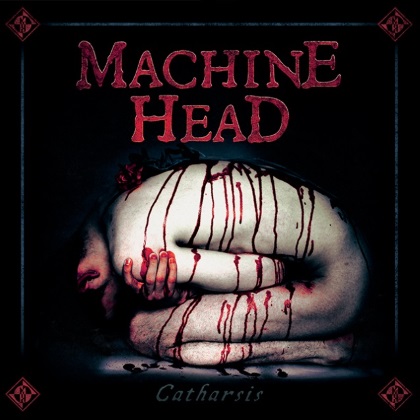 Ahead of the release of the Bay Area band's ninth full-length, MACHINE HEAD's central figure, Robb Flynn, stated that the album isn't one of the unit's heaviest. The notorious frontman doesn't listen to a lot of metal these days, in fact. His hardcore, punk rock and hip hop listening habits surface on the quartet's latest effort. It goes without saying that Flynn has taken bold moves in his career. Whatever his motivations might have been for the more accessible sounds and stylistic shift on "Catharsis", the results aren't pretty.

Flynn has also recently made it clear that he doesn't plan on writing an album like MACHINE HEAD's blistering debut "Burn My Eyes" again. And with respect to his perspective, would metal really benefit from such self-plagiarism? Taking into account the extent to which Flynn has grown as a musician in the last 20 years, a carbon copy of the group's phenomenal debut would be falling short of what MACHINE HEAD is capable of producing in terms of a vitriolic, updated take on its initial cut-throat approach to aggressive metal.

What's more, rather than ripping itself off completely, an updated retake on any period of MACHINE HEAD's history would benefit so much more with the clear reflection of the improved dynamic arsenal of the unit's other members: guitarist Phil Demmel, drummer Dave McClain and bassist Jared MacEachern, who replaced longtime, original member Adam Duce in 2013, prior to 2014's "Bloodstone & Diamonds". Or for that matter, any kind of step forward could benefit from the unit's impressive pedigree. "Catharsis" is a bold move. It's just the wrong move. That's what's most disappointing and frustrating here: The wasted potential of what could have been.

Flynn himself has mentioned that "Catharsis" reminds him of "The Burning Red". One can't help but wonder why he would want to take his band down that road since he has openly stated that MACHINE HEAD took the more commercial direction of said release partly due to label pressure. It seems like he's spent the last 15 years, since the release of 2003's "Through the Ashes of Empires", moving further away from the group's nu metal period. If he ever cared about "validating" himself in the eyes of the metal fans let down by "The Burning Red", and it seems like he was forgiven by most of them, those brownie points are likely to have been squandered.

Regardless, while "Catharsis" does harken back to "The Burning Red", it's actually much more than that. It's a retrospective glance at his musical journey as well as a brave step towards incorporating many of his musical influences outside of the boundaries of heavy metal. The high quality of performance and impressive musical prowess are simply undeniable. The problem is that the creative selection and output is lame.

Keeping in mind the earlier point about Flynn never doing another "Burn My Eyes" since he won't be who the person he was at 24 again, one can't help but wonder why he wants to be Devin Townsend circa STRAPPING YOUNG LAD. Looking beyond the hyperbole, the key riff at the onset of "Beyond the Pale" is nearly identical to the opening riff of STRAPPING YOUNG LAD's "Love?", a similarity Robb has dismissed as nothing more than "just a happy accident." And Flynn sounds like Max Cavalera, even down to the accent, on the charging opening track "Volatile". Throughout the album he seems to take vocal cues from Corey Taylor, as he does on "Behind a Mask". This track's soothing acoustics drift absurdly close to OPETH territory. And on "Heavy Lies the Crown", a track that shifts from an old-school metal riff to a thrash attack reminiscent of "Burn My Eyes", he sounds like Cronos from VENOM. Flynn is a great vocalist with a truly distinct voice. He would do better if he just played the part of himself.

Elsewhere, "Bastards" is a completely unexpected fusion between punk and Irish folk that speaks volumes of Robb Flynn's musical courage and ability to craft a catchy song. It just doesn't make sense within the framework of MACHINE HEAD. "California Bleeding", too, is hook-laden nu metal that sinks its teeth in quickly in spite of its corny lyrics. "Triple Beam", however, is an example of where the band should have drawn some clear boundaries. It's a cringe-worthy rap metal song that's difficult to get through even once.

There is a lot to take in with an album that's an hour and fifteen minutes long. It's a collection of disparate songs that celebrate MACHINE HEAD's talent and penchant for diversity. It's unfortunate that "Catharsis" lacks direction and is a creative letdown. It's a marathon that offers only a few sips of drinkable water. The Bay Area bruisers are able to shake the world of metal to its very core with awe-inspiring aggressive metal; they just haven't done so with "Catharsis".