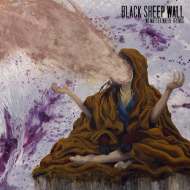 No Matter Where it Ends

You'd better be a sludge lover. BLACK SHEEP's "No Matter Where it Ends" is not a blended affair; it's not sludge-like, sludge-infused, or sludge-esque. It is sludge metal in its definitive form: harsh, abrasive, and pissed off beyond belief. Not even the occasional speed romp or mid-tempo groove breakdown? Not a one! Don't let the 1:33 running time of "Vitruvian God" fool you either; it too swings the ugly stick of plodding sludge with not a drop of mercy. As far as sludge purity is concerned, "No Matter Where it Ends" adds virtually nothing to the style, but is a solid representation of the genre that should send the eardrum-lacerated frowners into a state of moderate giddiness.

Whether GRIEF, EYEHATEGOD, or any number of band paying tribute to the Caustic Gods, what you get in spades are crawling tempos that alternately pound the listener into dust and riffs/vocals that metal every bit of flesh off his or her pretty little face. One could call "Cognitive Dissonance" as an exception, but that is only because the six-and-a-half-minute track envelopes with acidic atmospherics and grotesque effects to pretty good results. Otherwise, "No Matter Where it Ends" is a series of slow-kill stomps, ending with 12 minutes of scraping ugliness called "Flesh Tomb". This is the sound of disgust; plain and simple.

Sure it can get to be a bit much for those desiring variety and tempo variation, not to mention those with a hankerin' for melody. But on an album like "No Matter Where it Ends" too much is never enough. It's not about tickling those fancies anyway; it's about steamrolling them. Though the album could stand more identity, a fine distinction in this realm, it is a solid enough release that gets its point across like so many hands submerged in so many pots of boiling water. Point taken.