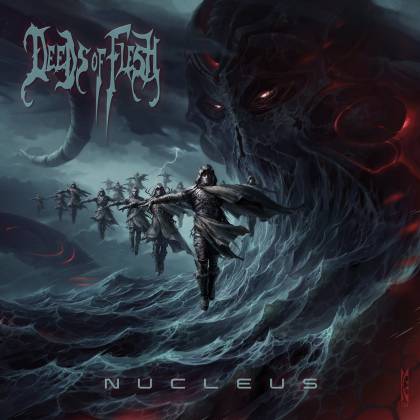 Erik Lindmark's untimely passing in 2018 sent authentic shockwaves through the death metal scene and beyond. Not just a significant player with his own band DEEDS OF FLESH, but a diehard DM lifer with the inestimable UNIQUE LEADER RECORDS to his credit, he was an underground talisman who truly believed in this wild, brutal music we love so much. As a result, it seems only fitting that those charged with completing "Nucleus" without their fallen brother's involvement have clearly done so with utmost respect and meticulous care.

DEEDS OF FLESH never released an album that didn't rip heads from necks, but they were also notable for continually nudging at the sonic cutting edge of things, bringing a polished and precise aesthetic to bear on the harrowing churn of extreme metal at its most infernal and foul. Both super-technical and spiritually old school, Lindmark's crew reached a new creative peak with 2013's "Portals to Canaan", and so the pressure to deliver a landmark statement and a fitting tribute must have been monumental. Remaining members Craig Peters, Ivan Munguia, Darren Cesca and vocalist Jacoby Kingston, who came out of retirement to help complete the project, have done an astonishing job of simultaneously honoring a much-missed comrade and pushing DEEDS OF FLESH's music further into the deathly stratosphere.

And that's all before you take note of the magnificent roll call of DM notables making guest appearances here. Any band that can enlist Frank Mullen (SUFFOCATION),John Gallagher (DYING FETUS),Luc Lemay (GORGUTS) and George 'Corpsegrinder' Fisher (CANNIBAL CORPSE) for the same project clearly has the respect of the broader, deeper scene, and each of those vocalists (and several more) delivers a memorable, conviction-fueled turn. But ultimately it's the quality of these songs, the staggering virtuoso dexterity of the performances, the sparking bite 'n' spite of the production and the omnipresent spirit of Erik Lindmark's death metal vision that make "Nucleus" such a synapse-spinning thrill.

Kicking off at the kind of speed that causes permanent spinal trauma, "Odyssey" hurls down the gauntlet to all comers. DEEDS OF FLESH have always blended technicality and aggression with fitful bursts of melody, but there's a finesse to the opening track that takes one's breath away. Similarly, "Alyen Scourge" combines everything long-time fans will be expecting, but somehow more finely honed, punishing and colorfully expressed: Kingston's authoritative vocals providing the final gut punch and that immaculate production allowing each instrument to leave its own scars. The standard of musicianship here is unquestionable, but what really sets "Nucleus" apart from countless other technical death metal records is the sheer creative fervor that seems to drive it. With Lindmark's idiosyncratic stamp all over them, songs like "Catacombs of the Monolith" and "Races Conjoined" strike an exquisite balance between blurred-finger showmanship and deep-hewn, old-school songcraft. The whole, 41-minute celebration whizzes by in what feels like a fraction of the time.

These are heady, fertile days for death metal, but born champions always rise to the top. Reborn in tribute to a true great of the game, DEEDS OF FLESH remain at the forefront of all things brutal.