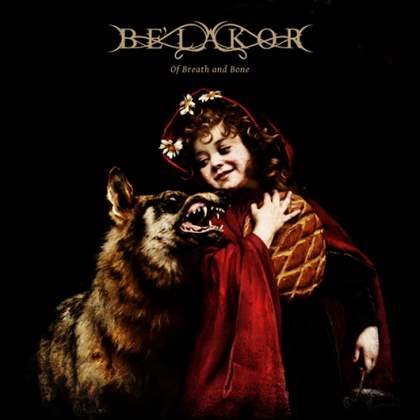 Of Breath And Bone

One of the most touted bands of the metal underground is Australia's BE'LAKOR. 2009's "Stone's Reach" made as many insiders' Best Of lists as THE OCEAN's "Pelagial" likely will this year. Of course, it's almost a given BE'LAKOR's third release "Of Breath and Bone" will be in the running as well.

If you're unfamiliar with the name, BE'LAKOR is a progressive death metal horde who've studied the chops and frames of OPETH, INSOMNIUM and to certain latitudes, AMON AMARTH. While hardly coming off like any of these acts in a direct sense, what has to be said about BE'LAKOR is they are near-perfect understudies who can enthrall and luxuriate every space available to them in their commonly long arrangements.

George Kosmas' demonic grumbles are about as extreme as BE'LAKOR gets. The band rockets in spurts, but detail, opulence and fluid transitions are principally the band's focus. "Of Breath and Bone" breaks no new ground for BE'LAKOR, but it sustains the band's near-mystic prowess for captivation.

They may hail from down under, but BE'LAKOR comes off like they've spent their vacations literally chilling in the Scandinavian permafrost. The Flemish and Baroque art pieces flooding the packaging for "Of Breath and Bone" lends impeccable nuance to its dark, old world majesty. Upon a first sweep of the liner notes, starting off with the uneasy prospect on the cover that Red Riding Hood and The Big Bad Wolf might've actually been in cahoots, you know you're in for a cerebral treat.

For death metal, BE'LAKOR's delicate techniques and expressive wonderment makes them almost tame, but never make the mistake of assuming virtuosity compromises this band. The instrumental interlude "To Stir the Sea" with its synthetic flutes and gorgeous acoustic weaves summons the subliminal sound of crashing tides in the listener's mind. This sets up a sprinkle of piano overtop the steady and eloquent crunch of "In Parting". In TESTAMENT's realm, a thrash opus would follow an interceding guitar instrumental, but BE'LAKOR shows that slow and sure is just as powerful. Soon, "In Parting" accelerates beyond its climbing decorativeness, much as BE'LAKOR does earlier in the album on "Abeyance" and "Remnants".

While the entire album is sprawled with extensive structuring, the rear section of "In Parting" is a widespread sequence of nine minute mini-epics running through "In Parting" and "To Dream and the Waking", then concluding with "By Moon and Star". There is so much happening in these three compositions they could sustain themselves as a separate release. Bursting at double hammer only in doses, they're still emotive and articulate, demanding a dedicated investment of the listener's attention.

Keyboardist Steve Merry, who gets drowned in the earlier tracks, is practically showcased towards the end. His moody piano laces overtop and underneath the ceaseless fret breezes summoned by Shaun Sykes, George Kosmas and John Richardson. Jimmy Vanden Broeck is the unsung hero of the band, as he is nearly accountable by himself for keeping BE'LAKOR on track through their unending signature swaps. Vanden Broeck is called upon to deliver a mostly tempered roll throughout BE'LAKOR's diligent movements while being reflexive enough to step on the gas for a bar and then immediately brake back down. Vanden Broeck is just as incremental to the sophisticated configuring of this album as the Gothic guitar lines and supplemental instrumentation. As nasty as George Kosmas' spew can be, there's still a presiding refinement to BE'LAKOR's craft that his malice is all but exorcised.

Another impressive outing for a band that might as well be considered architects more than mere musicians. If you're already a fan, "Of Breath and Bone" is happily status quo. If you're just stepping up to BE'LAKOR, the experience will be comparable to witnessing the genesis of a dark horse character in a comic book series rise to prominence.