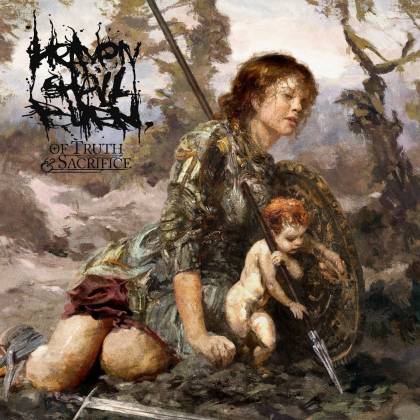 Of Truth And Sacrifice

When you consider how resolutely HEAVEN SHALL BURN have stuck to their brutal metalcore guns over the years, approaching the German band's extravagant, double-album return could easily fill you with a sense of trepidation. As much as veteran bands have earned the right to be as indulgent and adventurous as they see fit, facing 100 minutes of this stuff is undeniably daunting. But HEAVEN SHALL BURN have been away from active service for more than three years and, in that spirit, "Of Truth and Sacrifice" offers evidence of a carefully realized reinvention and a flourishing of the band's songwriting skills. Having had the time to dig deep into the essence of their sound, the Germans have somehow managed to avoid an over-egged monstrosity. Instead, this is easily the strongest record they have ever made.

It certainly begins in the manner that fans have become accustomed to. "Thoughts and Prayers" and "Eradicate" are savage and relentless, full of recognizable 'core tropes but delivered with venom and vitality. Their legendary status may be restricted to mainland Europe, but HEAVEN SHALL BURN smash as hard as any American band peddling the same tightly defined fare. That said, European influences dominate much of this opulent set: "Protector" nods to the darker corners of the DARK TRANQUILLITY catalogue, exhibiting a shrewd understanding of (this strain of) metalcore's stylistic provenance. "My Heart and the Ocean" is another exhilarating sidestep, into territory that shares INSOMNIUM's windswept fury while never losing that remorseless double-kick momentum. Meanwhile, "Expatriate" is simply astonishing. HEAVEN SHALL BURN have dabbled in doomier atmospheres before, but this nine-minute epic is overtly proggy, gloriously melodramatic and imbued with a sense of compositional fearlessness that the band have seldom displayed before. By the time you reach first-disc closer "The Ashes of My Enemies", a beautiful, orchestral instrumental, you have the right to feel exhausted (in a good way).

At this point, less rabid fans may feel that they've already had enough. The first half of "Of Truth and Sacrifice" would have worked perfectly well as a stand-alone album in its own right, and 100 minutes is a really, really long time, isn't it?

Perhaps surprisingly, then, the second half of this generous outpouring is every bit as dynamic and absorbing as the first. Second-half opener, "Children of a Lesser God", is stately and grandiose, vocalist MARCUS BISCHOFF a commanding, eerie presence, but it's "La Résistance", a thumping, four-to-the-floor industrial disco stomper with black metal overtones and simmering synths, that seals the deal. It feels mischievous and deliberately jarring, and yet perfectly positioned on this deceptively diverse record. It's followed by the majestic sprawl of "The Sorrows of Victory", which nods to the slow-motion menace of MY DYING BRIDE (mega-fans will recall HEAVEN SHALL BURN's cover of "The Cry of Mankind") via rolling waves of grim, death metal scree and hazy flashes of symphonic pomp. Remarkably, the smart ideas and gently subversive detours continue to the bitter end. The crestfallen bombast of "Weakness Leaving My Heart" provides a spine-tingling finale, lunging at the heart strings and jugulars alike, and may just be the finest song of the lot.

It's been a long time since any of metalcore's big hitters made an album that genuinely sought to push the (sub)genre forward. "Of Truth and Sacrifice" certainly contains plenty of red meat for the faithful, but it's also a brave and occasionally startling piece of work from self-evident masters of the form. And given that we've all got so much time on our hands at this point, maybe making a sprawling double album wasn't such a daft idea after all.