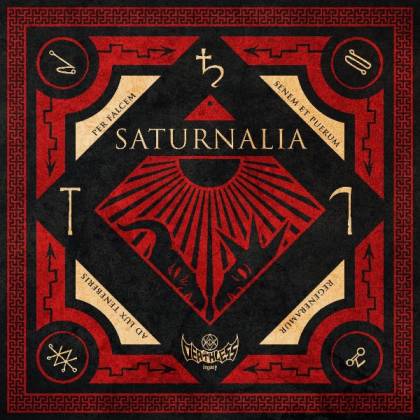 Sometimes it's best to lay your cards on the table: this is less a straightforward review than a shameless attempt to get more people to listen to this incredible band. Italian metal hasn't always the best of reputations, but the country has been producing a veritable shit-ton of great stuff in recent times, and DEATHLESS LEGACY have frequently stood out as one of their finest bands of all. Initially formed as a tribute to DEATH SS, they have released four studio albums since 2013; each one a thrilling and gleefully grotesque blur of thunderous gothic metal, old-school melodic bombast and a refined sense of theatrical macabre. "Rituals Of Black Magic", 2018, was particularly great, and seems to have spurred DEATHLESS LEGACY on to make their most opulent and audacious statement to date. A single, 24-minute track, "Saturnalia" feels like a meticulously constructed mini-opera, albeit one that owes more to KING DIAMOND than it does to the histrionic end of the power metal scene. To emphasize the Italians' artistic drive, it arrives accompanied by a long-form video; a wickedly inventive visual piece that neatly encapsulates the band's visual shtick. Despite their relatively low profile, DEATHLESS LEGACY are clearly not suffering from a lack of confidence or creative ambition.

In musical terms, "Saturnalia" follows the subtly cinematic textures and tones of previous albums. A brief but profoundly melodramatic overture gives way to the first of several balls-out metal riffs, vocalist Steva howling charismatically over a propulsive undertow, chorus hooks erupting in all directions: for newcomers, it is a pretty exhilarating entry point into the DEATHLESS LEGACY sound. From then on, "Saturnalia" takes an episodic approach, with numerous interludes, seamless dynamic twists and bursts of startling aggression and overwhelming pomp. It sounds like they're having the time of their lives, and it's particularly noticeable that this long-form, prog-friendly approach suits the band's storytelling instincts and theatrical sensibilities down to the scorched ground. Steva is a bona fide star, too. She injects a laudable amount of venom and personality into every syllable, leading from the front and oozing dark charm.

So yeah, this is a simple plea: listen to DEATHLESS LEGACY. If you like heavy metal, horror and the darkest of drama, these Italian black hearts are far beyond essential listening.