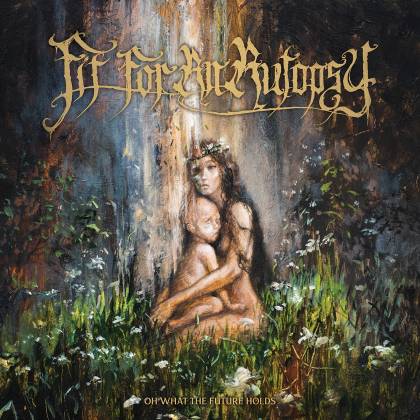 FIT FOR AN AUTOPSY

Oh What The Future Holds

The sixth full-length from FIT FOR AN AUTOPSY sees the band at their most refined level of musicianship and songwriting yet, without sacrificing any of their fury. Each musician performs complex parts that showcase their awe-inspiring expertise with their instrument, while still managing to work cohesively together instead of competing with one another. Will Putney (guitar) puts his enviable producing skills on full display with his masterful handling of crescendos and decrescendos. Like their previous records, "Oh What The Future Holds" anchors itself in social commentary about the inhumanity, greed and cruelty that has widened the disparity between the haves and the have-nots. And beneath all of the anger and belligerence is a deep sense of tragedy and mournfulness about it all.

"Oh What The Future Holds" delivers a wonderful range of rhythms and techniques, beginning with the soft, haunting piano at the opening of the title track. The almost cinematic tension builds with the addition of light percussion, before exploding into the dominating heaviness expected of FFAA. Every song thereafter carries on the same skillful work of building up and breaking down, quickening and slowing. "Far From Heaven", "Two Towers", and "The Man That I Was Not" similarly begin with slower, softer segments featuring spoken and even melodic vocals (Joseph Badolato has a beautiful singing voice, by the way) before ultimately erupting in the raging guitars and guttural vocals for which they're known. It's difficult to keep track of how many times the rhythmic patterns shift per song, but it's done so artfully that it works exceptionally well.

But despite the numerous impressive guitar solos and rapid-fire riffs, it's the percussive elements of the album that end up being the most distinctive. "A Higher Level Of Hate", the record's most crushing, unrelenting and infectious song, starts out with bare, high-toned, bongo-like patterns reminiscent of the kind of makeshift drumming one would hear on a city street. Likewise, other songs incorporate rim-tapping sounds that give great depth and versatility to the record. It's these little outside-the-box touches that make all the difference, and one could argue that there is room for even more.

In the midst of the insane BPM rates, bellowing chants and pummeling breakdowns, there are a few moments that really pull at the heartstrings. The stretched out, wailing guitar parts on "Collateral Damage" and "Conditional Healing" touch the main tragic nerve at the heart of "Oh What The Future Holds", which ultimately comes to a head with the closing track. This undercurrent of sadness is what separates FFAA from other deathcore and metal bands. These songs are not just rip-roaring bangers, but fundamentally, they are laments, giving the music satisfying substance and dimension.