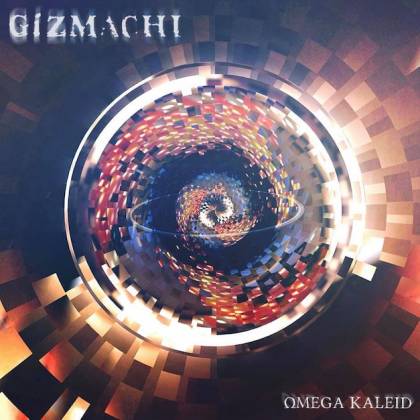 It seems reasonable to say that not everyone will remember GIZMACHI. 2005 seems like a very long time ago now, and the band's excellent debut album "The Imbuing" never really got the recognition it deserved. This unexpected return after 16 years is unlikely to cause earthquakes, that is, until people actually hear it. With the inspired choice of SOILWORK / NIGHT FLIGHT ORCHESTRA frontman Björn "Speed" Strid on lead vocals, "Omega Kaleid" takes all the smart ideas, polyrhythmic mischief and scabrous, left-field melodies that made their debut so engaging and upgrades the lot, ensuring that GIZMACHI are now fighting fit for 2021 and considerably more distinctive and original than most. It is always, as they say, the quiet ones. They are quiet no more, and "Omega Kaleid" skillfully conspires to keep it that way.

The real magic here lies in the way GIZMACHI employ all kinds of jaw-wrenching polyrhythms and fucked-up riffs without ever sounding remotely like any other band, MESHUGGAH worshippers or otherwise. Perhaps a little annoyingly for the band themselves, they were making music this idiosyncratic and skewed 16 years ago too, but somehow it still sounds ahead of the game and yet weirdly timely and accessible at the same time. Not entirely surprisingly, the commanding, charismatic presence of Björn Strid has nudged everything up a few additional notches too, making GIZMACHI's already nails-hard attack even more punchy, brutish and compelling as a result.

A thrilling entry point into this album's twisted world, "Paradox" is a blur of flailing grooves and scattershot tempo shifts, with a woozy, tripped-out mid-section that provides Strid with his first opportunity to croon. There are countless ideas crammed into the song's five-and-a-half minutes, plus some giant, soaring melodies and a hint of ALICE IN CHAINS-like morbid ennui. It's such an intricate and intoxicating brew, that the relatively straightforward alt-rock thunder of "Broken Ends" comes as a slight surprise, that is, until the song veers off on several churning, mutant riff detours: another brilliantly tight but groovy ensemble performance from a band that truly sound like they have been itching to let rip for, oh I don't know, at least 15 years.

Laudably, the rest of the album maintains both the sharpness of those hooks and the feverish invention driving the songs' oddball structures and dynamic extremes. For sheer, visceral fire and fury, "Look What I've Become" is an obvious high point; for more epic, exploratory fare, the eight-minute "Inner Visions" begins as a flat-out bombardment, before slipping majestically down a psychedelic rabbit hole and into atmospheric, post-metal territory, while the closing title track morphs and warps through several movements, each one more mesmerizing than the last.

Whether anyone was expecting it or not, this is how you make a comeback.