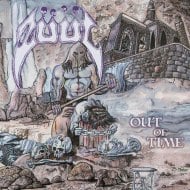 Forget about the retro trad-metal trend and forget about the kids wearing IRON MAIDEN "Killers" shirts they bought at Hot Topic because they think it's cool to appear old school, even though most couldn't tell a Steve Harris bass line from a Cronos clang to save their lives. Forget about the record labels that'll sign any band with more than two members wearing denim, leather, and Chuck Taylors. While you're at it, forget about "all the other shit that they teach the kids in school" (thanks for that, Bon). That's not to say that a select set of elite acts don't do it extremely well, such as ENFORCER, WHITE WIZZARD, and others I'm blanking on at the moment; only that ZÜÜL's "Out of Time" is easily one of the best albums of its kind I've heard in years and the only one you'll need in 2010 to get your fix of pure and unforgettable traditional heavy metal. The big-boy labels blew it in failing to discover this phenomenal NWOBHM-inspired band from Carbondale, IL. The ears of Chris Black (SUPERCHRIST, PHARAOH) never fail to find the diamond in the rough and he swooped in, scooped 'em up, and signed 'em to his Planet Metal label.

While it is true that the influences heard on "Out of Time" are fairly obvious and that the members of ZÜÜL certainly share an affinity for early IRON MAIDEN song construction, if ever there was a case to be made for not giving a flying flip about originality, this is it. The fact that every single song is superb in arrangement, performed with expertness, and incredibly memorable is the only damn thing that counts.

This not an album with a handful of highlights; it is one splashing over the sides with anthem-quality material. Beyond the heavy metal firestorm of instrumentation, exemplified by a title track that raises hairs and kicks asses, songs like "Ride Ride", "Warhammer", and a modern MAIDEN-esque classic called "Air Raid" are super catchy, sounding just as fresh the 10th time you've heard them as the first. Even the verses of "Executioner" command undivided attention, in this case the patterns reminiscent of vintage Phil Mogg (UFO),intentionally or otherwise. Oh hell, who am I kidding? All the cuts are catchy in one way or another. You can't just play one song; it's all or nothing every time.

In comparing the music of "Out of Time" in a 21st Century context, bands that come immediately to mind are SUPERCHRIST (check out "Backstreet Crawler"),SLOUGH FEG (sans the overt Celtic aspects) for some of the structures and, generally speaking, the mid-range vocals, and BIBLE OF THE DEVIL for the purity of the NWOBHM/THIN LIZZY attributes. I don't know about you, but that would be all I'd need to know to purchase "Out of Time" post-haste. And yet, ZÜÜL don't come across as merely mimicking well worn styles. They've got a personality of their own, one that just happens to have been formed through years of digesting some of the best heavy metal ever recorded. A flawless full-length debut, "Out of Time" is the trad-metal album to beat in 2010, hands down; probably 2009 and 2011 as well.