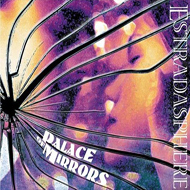 Let's get it straight right now: "Palace of Mirrors" by Santa Cruz's ESTRADASPHERE is not a metal album. BUT, it is a fine jam with a smattering of guitar-based heavier parts amidst the violins, upright bass, accordion, bass clarinet, harpsichord, organ, and Japanese Shamisen. And yes, this 13-track instrumental adventure fits snugly on the roster of the always boundary-pushing The End Records. And you know what? The intensity of the pieces and the passion of the performance can still appeal to the metal warriors among you; maybe not the "if it's not DYING FETUS it's crap" crowd, but certainly those desiring to broaden their horizons and still rock out. Besides, MR. BUNGLE's Trey Spruance discovered the sextet and signed them to his Mimicry Records label, so there must be at least something cool going on here, right?

As many of you will attest, instrumental albums can be a bit of a challenge to fully enjoy in one sitting, not to mention return to for repeat listens. In the case of albums like "Palace of Mirrors", as well as the decidedly more rock-based (by way of MOGWAI) "What to do at time of Accident" by HESTON RIFLE, there is so much musical variety and action-packed movement that the listening experience is a pleasurable one. Translation: I didn't yawn once during the many times spent with the disc. Often upbeat, yet rarely spastic, the styles heard are many. "A Corporate Merger" fuses Mediterranean colors with Eastern European gypsy jams, while "Smuggled Mutation" also incorporates the latter style but with pronounced guitar riffs and semi-manic speed bursts. Sultry jazz styles are heard on "The Debutante", a song with some alluring (in a smoky bar kind of way) keyboard and horn parts. The heaviest material, at least in sections, arrives on the style blend that is "The Return", mainly due to forceful riffs and tough drumming. And we've barely scratched the surface here, as musical periods as diverse as the '20s and the '60s can be traced through the music of "Palace of Mirrors".

"Palace of Mirrors" will not appeal to most garden variety metal types, and what difference does that really make anyway? The point is that ESTRADASPHERE can straight up jam their assess off with confidence in a way that can be grasped by anyone with even a modicum of appreciation for true musicianship. Spend a little time with this one. Before you know it, you'll be sucked right into the band's expansive sounds and clever style blends. It's a lot of fun.