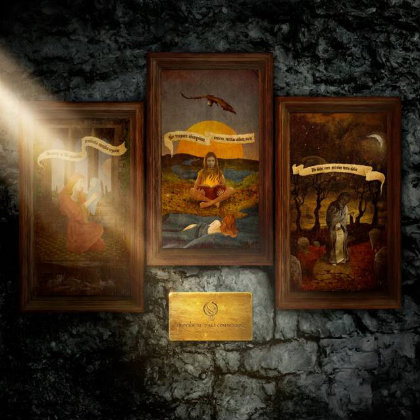 "Heritage" turned more than few heads in the metal world as OPETH all but declared themselves liberated from the genre. Death metal is now practically exorcised from the songwriting process of these virtuosos, who turn in a prog-chopped masterpiece bearing the influences of GENTLE GIANT, KING CRIMSON and NEKTAR. "Pale Communion" may be a horror show for some of OPETH's harder-than-thou sanctions, who are no doubt feeling ostracized by the band's subscription to progression. Yet "Pale Communion"'s brilliance outshines its bravery and OPETH not only liberate themselves, they separate themselves from just about everyone else with reach of their genius.

"Eternal Rains Will Come" sounds like a depressing proposition in title, even though OPETH bounds forth with complex polyrhythm and cascading instrumentation for the first couple minutes. OPETH then swings things backwards into a momentary somber piano fugue before picking back up with Martin Axenrot's chuck 'n' jive rhythm, Martin Mendez's jazzy bass lines and swirling organs that usher the first sign of vocals well beyond three minutes. Mikael Åkerfeldt is joined by backing vocals that swoon alongside the peppering Mellotron draining into the track. The linked vocal scales plunge prior to the rising and falling of Fredrik Åkesson's guitar gradations and every second of the 6:43 "Eternal Rains Will Come"'s running time is spent building towards something better than the previous count.

"Cusp of Eternity" picks up the tempo a click as Martin Axenrot slips into a primary drive amidst a swirling, Middle Eastern flair to accompany Mikael Åkerfeldt's dream-bound altos. Axenrot jams out with the rest of the band as "Cusp of Eternity" changes gears into a funk sprawl before resuming the original course of the song, which gains an extra layer of oomph as OPETH nudges the song home with an energetic groove.

Afterwards is the 10:53 "Moon Above, Sun Below", which might be the most challenging composition of the album with its initially cautious tempo and counter-tempo that allows the Mellotron to mist above everything else. Abandoning this keynote to permit the first of two attractive, acoustic interludes before progressing to a more demanding succession of layers, OPETH couldn't keep their listeners guessing more on this track. Some DEEP PURPLE-esque organ jive awaits, along with some of the finest vocal synchronization OPETH's ever generated, thus "Moon Above, Sun Below" is to be discovered, not just heard. It is the true essence of classic prog and whether or not you're a holdout for OPETH's darker corners that are all but to their backs, this is fascinating songwriting.

These guys couldn't trim down to a simple two-and-a-half to three minute song even if threatened with execution on the spot, though "Elysian Woes" and "Goblin" make the attempt at abbreviation at less than five minutes apiece. "Elysian Woes" is absolutely gorgeous with some of the most breath-stealing arrangements of the album. Mikael Åkerfeldt affectingly leads the melancholic guitar lines toward a climactic font of opulence once the entire band joins in. While the song bears reminiscence of the "Damnation" album, there's a sense of Michael Oldfield prog and "Virgin Suicides"-era AIR bursting behind the lulling infrastructure of "Elysian Woes"' delicate configurations.

The funky instrumental "Goblin" feels like a throwback to the scores of Seventies badass crime stomper flicks, while "River" changes tones once more with a spritely acoustic parlay and anti-maudlin vocal chimes. The 7:33 "River" might've stemmed from one of the most intrinsically happy places OPETH has ever found within their creative zone, one that was likely soaked by Neil Young and the Allmans as much as NEKTAR and EMERSON LAKE AND PALMER. The morose closing number "Faith in Numbers" is hardly a downer in contrast to "River". With Mikael Åkerfeldt pensively wailing his guts out and the emotive string layers woven into it, "Faith in Numbers" is a genuinely moving experience to stride out of a transitory album that almost nobody in this genre will be able to match.

"Blackwater Park" and particularly "The Drapery Falls" within it remains OPETH's most majestic performance to-date, yet "Pale Communion" is a boundless push into pure prog that abandons the band's death metal roots if not their Goth modes. Instead, they buck their own system and evolve like a chrysalis. This album is sumptuous, soulful and complicated, but it is the next logical step beyond "Heritage"'s eccentric declaration of this band's new dawn. This dawn being inclusive of a full purge of demon ralphs in favor of Mikael Åkerfeldt's tantalizing cleans (at times wonderfully reminiscent of Doug Pinnick from KING'S X),cheers to the band for showing their guts and playing to their instincts. Like their new prog direction or not, OPETH continues to reign as one of the greatest, most forward-thinking bands on the scene.