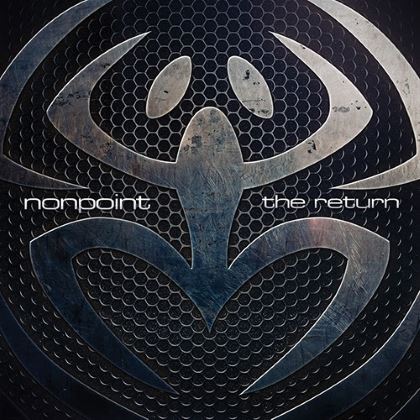 Seventeen years in the life and a new album cover liberally borrowing from the "Spiderman" movie poster art, Florida rockers NONPOINT are back with their latest offering, "The Return". Bringing aboard Grammy-nominated producer Johnny K (DISTURBED, STAIND, MEGADETH) for the second album in a row, let that serve notice as to what you're getting on this album. Strong out the gate, the album settles for gross predictability with a noisy metalcore experiment along the way.

The first two songs "Pins and Needles" and "Breaking Skin" are the album's best and the latter track its launch single. "Pins and Needles" carries a shoving groove on the verses and appositely empathetic tones on the choruses with a speed burst serving up the guitar solo. It feels like the prelude to a fight, a fight that's fostered with largely less force as the album progresses. Elias Soriano, one of NONPOINT's best assets, delivers a gravelly though tuneful plod through "Pins and Needles" and on "Breaking Skin", he hits numerous pitches reminiscent of the late Kevin DuBrow. "Breaking Skin"'s riff-driven huffs sink their hooks in and NONPOINT thus delivers a satisfying pop rocker.

From that point, "Razors" sets "The Return" on a frequently repetitive course of FM-hungry agro numbers that's accented at least by Elias Soriano's elongated drawls on the choruses. Soriano sing-scats through "Misery", which bears a good core melody but ultimately aims toward breakdown-plugged bridges and overly-familiar chorus swings. The title track is the sound of would-be vengeance with its roundabout recall of "Razors"' theme about dealing with naysayers. Their elaborate breakdown gloms and blaring, told-you-so screaming mantra "on your knees!" are a bit much. If that's how NONPOINT feels as a band after all this time, more power to them, but this energy could've been spent more constructively.

"Take Apart This World" plods along (minus a few quick double hammer bursts from Robb Rivera) with its moody ranting about floundered relationships. Once more attempting to use breakdown chops in different, less obvious spots, they poke instead of clout and the song misses the opportunity to rise from Rivera's blasting segues. Even the subsequent track "Forcing Hands" has the chance to capitalize on its core riffs but instead resolves for an obvious AOR touch that will at least satiate their diehards.

Adam Woloszyn's bass lulls open and knock around "Goodbye Letters" as Rasheed Thomas and B.C. Kochmit pick up his stride and serve up complimentary gliding lines. Elias Soriano once again drags-scats his way through the verses in what turns out to be another ditty about flushing away sour romances.

So it goes through "The Return" to the not-so-hot metalcore noodling of "Never Cared Before" and then "Fucked", both of which at least pick up the pace of the album. The latter song you'll either crank from your car like fabricated rebellion or you'll pray your twelve-year-old-and-below kid doesn't get a hold of it. Soriano and company attempt to make a stand about the sorry state of the world with a litany of F-bombs and gang shouts, but it's all hip to a fault. At least the acoustic opening to the ballad "Never Ending Hole" is one of NONPOINT's moments of grace on this album, along with the core sentiment "Show me show me, don't act like you know me better than I know myself" chiming through the closing number, "Show Myself".

As ever with bands like NONPOINT and their peers, they have a stout following but are advertently scorned by those with heavier tastes. Subjectivity applies with this band, of course. Though "The Return" as a whole doesn't live up to the promise of its openers, NONPOINT do drop their game with a professionalism befitting of their tenure.