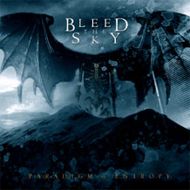 This one surprised me. I was expecting the latest bland metalcore signing to capitalize on the genre's popularity. Well, it's not bland anyway. "Paradigm in Entropy" is a hard smack in the mouth. I suppose you can call it metalcore, but as far as I'm concerned, it's just modern extreme metal. The sound falls somewhere around the aggressive rhythmic punch of CHIMAIRA (including Noah Robinson's vocals) with a splash of FEAR FACTORY. There are shades of STRAPPING YOUNG LAD's suffocating wall of sound too. The sextet has hit the bull's eye when it comes to dense, scathing riffs, violent delivery, and clean/atmospheric vocal sections that are straight out of the Burton C. Bell and Devin Townsend school.

The Orange County bunch really know how to keep a person on edge with an approach driven by drummer Austin D' Amond's thunderous percussion and the subsonic tones created by sampler/sequencer Puck (yes, Puck) and bassist Casey Kulek. The riffs of guitarists Kyle Moorman and Wayne Miller are thick and abrasive, the equivalent of having your skin sanded off. Robinson's vocals fight through all of it with a mostly corrosive style that is convincingly dangerous. Once you've recovered from the first-spin jolt of the songs, they begin to get inside your head, and I'm not even talking about the clean melodious parts yet.

Those aseptic flowing vocal sections do nothing to lessen the impact of the brutality that surrounds. If you understand the reasons why the juxtaposition works so well in the case of bands like FEAR FACTORY, SYL, SCARVE, and MNEMIC, then you'll know exactly what I'm getting at. It's not something forced or contrived, it just works, the effect more a nervous reprieve than a melodic break. When the vocal style is used extensively on the somewhat ethereal parts of "The Martyr", it's something you don't wait out until the heavy stuff returns; you get swept up in it.

A large debt is clearly owed to the aforementioned bands, and that's fine with me. Familiar as it may be, it's still well done and heavy as fuck.