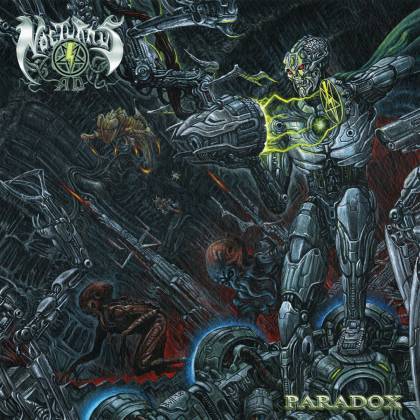 NOCTURNUS was a unique gem in the fertile Florida death metal scene. Anti-religious and occult thought provided the source inspiration for many Florida death metal acts, while horror movies and real-life gore inspired others. But NOCTURNUS merged a fascination with the occult alongside science fiction themes, something that was unheard of at the time. What's more, the band utilized keyboards in its arsenal, not only as a backing element, but as a key facet of the music. This, too, simply wasn't done at the time within the realm of death metal.

The American progressive death metal band was spearheaded by former MORBID ANGEL member Mike Browning. The drummer and vocalist started anew with NOCTURNUS following the disbanding of his previous band INCUBUS, not to be confused with the nu metal/arena rock band that formed the following decade. Following a pair of more relatively conventional yet considerably raw and evil sounding demos, one of which featured Vincent Crowley who would go on to form ACHERON, in 1990 the Floridians unleashed the groundbreaking debut full-length: "The Key".

Just a few years following the epic debut, the band drifted into obscurity, and there was no love lost amongst key personnel who parted ways. In the years that have passed the separate camps have performed under the NOCTURNUS moniker. Browning has now resurrected the true spirit of the band under the name NOCTURNUS AD. His intention was to pick up from where the unit left off following the 1990 debut. NOCTURNUS AD's "Paradox" is, in effect, the proper follow-up to "The Key", as far as sound and storyline.

"Seizing the Throne" and "The Bandar Sign" are pummeling expressions as much as they are unabashed celebrations of heavy metal. Tracks like these indeed emphasize the metal in the death metal as well as technically challenging and impressive qualities. Amid the flurry of notes, blast beats and insane keyboard lines, there is a clear sense of direction and clarity. Browning's evil chants prove to be as charming as ever, narrating the story that he initially began nearly 30 years ago. "Paradox" is a warped amalgam of the occult and science fiction following "the journey of Dr. Allen William Magus (a.k.a. Dr. Magus),a scientist ravaged by a war plague disease and kept alive by creating a bio suit; the aftermath of the events revealed on 'The Key,'" according to a press release.

Former OBITUARY bassist Daniel Tucker, alongside keyboardist Josh Holdren and guitarists Demian Heftel and Belial Koblak—the lineup also comprising Browning's AFTER DEATH project—accompany Browning in successfully capturing "The Key"'s true essence and spirit. The collective performs with a sense of purpose and determination as though they're possessed by something greater than themselves. Whether or not that's actually the case, that's what it sounds like. And "Paradox" is exactly what death metal needs right now. Timeless. Passionate. Magical. Unrelenting.