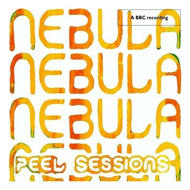 I've said it before and I'll say it again; when power trios fire on all cylinders, there is no impact more powerful than a bass/drums/guitar mix. Obviously, it requires tight playing, but that indefinable sixth sense that turns three individual musicians into an indistinguishable grouping that moves in unison is what makes the difference. It also helps when them music played is jammy and blues-based, as the style lends itself to an improvisational feeling within the constructs of a proper song.

Enter NEBULA, a group that proudly carries the torch of the power trio. Luckily, you get to hear the stoner rock machine in their natural environment: live! The jamsters are on fire playing three different sets of songs recorded between 2002 and 2004 for a BBC Radio 1 "Rock Show" and two separate Radio 1 "Peel Sessions". Granted, a second guitarist (Ian Ross) does appear on the four tracks recorded for August 22, 2001 Radio 1 "Peel Session" (and takes nothing away from the overall album vibe),but the trio format has always constituted the heart and soul of NEBULA.

You can consider this a grand introduction to NEBULA or you can simply lap up the free flowing, bluesy hard rock in a way that just doesn't translate as well on studio recordings. Beginning with a super cool ode to Radio 1 during the first half of "Radio 1/Clearlight" (as in "Radio one / you make the girls cum / you fly across the sea / live on the BBC"),"Peel Sessions" contains live interpretations of many classic cuts. Included are the upbeat "Carpe Diem", the monolithic stomp of "Strange Human", and the slow burning "All the Way". Impeccably recorded, the performance sounds as organic as it feels spiritual.

The jam quality on this baby is off the charts, the guys rocking along at a level only attained by the likes of BLACK SABBATH, KYUSS, and FU MANCHU, not to mention the blues gods. The bass lines (whether M Mitchell, Dennis Wilson, or Mark Abshire) just plain fly when Eddie Glass rips out one of his blazing, heartfelt solos, yet what sets the guys apart from their brethren is the ability to pen a hook. And the organ playing of drummer/vocalist Ruben Romano on "Fin" is not just noteworthy, it is friggin' orgasmic!

"Peel Sessions" is essential for NEBULA fans, as if I even needed to point that out. It is also a must for well played/written blues/stoner rock and those looking for a religious rock 'n' roll experience.