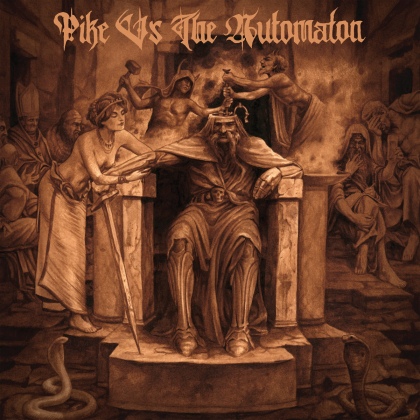 Pike vs. The Automaton

Pike Vs. The Automaton

It is a certified Heavy Metal Fact that Matt Pike is a badass. From inciting a doom metal revolution that resounds to this day with SLEEP or taking people's scalps off at a more destructive pace with HIGH ON FIRE, the Californian's mastery of The Riff and utmost dedication to rocking out harder than everybody else amount to a powerful legacy. Combined, they amount to more than enough to make most sensible people want to hear his first solo album, and "Pike vs. The Automaton" is practically guaranteed to make all of those people exceptionally happy.

Pike has described this as "a psychedelic rock record that fans of SLEEP and HIGH ON FIRE will enjoy" and he is, as you might hope, entirely correct. For a start, there is plenty here to sate the needs of anyone craving a fix from either of those bands. An opening brace of "Abusive" and "Throat Cobra" makes it plain that part of Pike's motivation for making this record was to scratch a few musical itches denied by onerous pandemic restrictions. In particular, "Throat Cobra" is as belligerent and unstoppable as anything in the HIGH ON FIRE catalogue. It rattles along on a deranged, speed metal D-beat, avowedly punk as fuck but firmly rooted in Pike's acknowledged sonic domain of thunderous, rabid and scruffily epic heavy metal. Meanwhile, those pining for the languorous, sledgehammer psych of SLEEP will find "Trapped In A Midcave" to be a potent substitute. Driven by a princely Pike riff and a wickedly funky, slow-motion strut, it reeks of souped-up mega-bongs and sunstroke.

The real revelations begin with "Land", a meandering, shambolic, acoustic campfire hymn elevated to magical levels by a cameo from MASTODON's Brent Hinds and the syrupy undertow of a Hammond organ, it chimes perfectly with everything we know about Matt Pike, but stripped down to a captivating, mescaline-fueled reverie. To slap listeners awake, recent single "Alien Slut Mum" serves up a scabrous squall of prime Pike riffing with a drugged-out and nightmarish mid-section and bursts of VOIVOD-like dissonance, before the shape-shifting doom-jam sprawl of "Apollyon" steers proceedings into more expansive territory. Another neck-snapping about-face, "Acid Test Zone", is the ugliest thing here; a violent, crusty reminder that psychedelic rock isn't always about posi-vibes and good times. It segues into the astonishing "Latin American Geological Formation" which, despite its knowingly clunky title, ebbs, flows and mutates with lava-like momentum — a tornado of overdriven psycho-doom with the pernicious, post-high blues coursing through its veins.

For all its turbocharged highs, "Pike vs. The Automaton" is undoubtedly a looser and more laidback record than most its instigator's past works. The closing "Leaving the Wars of Woe" is a case in point: 11 towering and turbulent minutes of trippy doom, its glacial gait and hypnotic circularity tap into the same sense of weed-ravaged wonderment that can be found in both of Pike's noted bands, but somehow with even more red-eyed swagger and off-the-rails abandon than either.

For an album that was created in lockdown, "Pike vs. The Automaton" sounds joyously liberated and compromise-free. It also sounds like an unexpected one-off, crying out to be repeated.