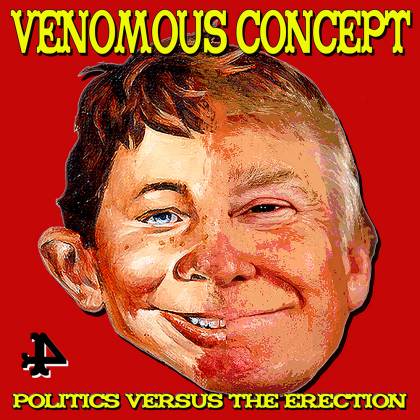 Politics Versus The Erection

Irrespective of where you lurk on the political spectrum, there must surely be moments when the urge to block out any mention of politics or politicians becomes overwhelming. Helpfully, VENOMOUS CONCEPT have spewed up their fourth studio album as the perfect means to drown out the tsunami of bullshit pouring through your various media conduits. Recorded in four days and as grubby, fucked up and unapologetically old school as it gets, grind polymaths Shane Embury and Kevin Sharp's latest batch of hateful hardcore punk eschews insightful comment in favor of an untamed, fuck-it-all approach that eviscerates conservative thinking by simply being angrier, snottier and more enthusiastically vulgar than just about everything else. Still firmly in the territory they carved out for themselves way back in 2004 with "Retroactive Abortion", VENOMOUS CONCEPT play punk the way POISON IDEA played it, but with 30 years of grindcore vitriol bubbling and hissing in the tank. From the explosive gut punch of opener "Simian Flu" onwards, it's so fast, furious and ugly that you won't know whether to burst into fits of laughter or throw a chair through the nearest window. Do both, I would suggest.

As representatives of the, erm, Clown Party, VENOMOUS CONCEPT have plenty to say this time around. Unfortunately, most listeners will be too busy picking bits of their own skulls from the ceiling to pay that much attention to the lyrics here. It doesn't get much more direct and demented than 53-second "Hole in the Ground", and there are few things more exciting than hearing drummer Danny Herrera at full pelt. But it's the slightly more expansive bursts of swivel-eyed yobcore like "Lemonade" and "Promise" that suggest that VENOMOUS CONCEPT seem to have accidentally evolved somewhere along the line, incorporating more bowel-rattling chug and abrasive atonality into what are, in every other respect, flat-out, uncompromising hardcore punk tunes. As an added bonus, Sharp's vocals still veer from barks, screams and growls to noises that probably shouldn't come from a human being's throat, but somehow, he sounds more deranged than ever on the likes of "Colossal Failure" and the insanely thrilling "Mantis Toboggan".

Just what the (possibly unlicensed) doctor ordered, "Politics Versus The Erection" is what happens when smart men lose their fucking minds and channel their energies into making a horrible noise. Vote VC!