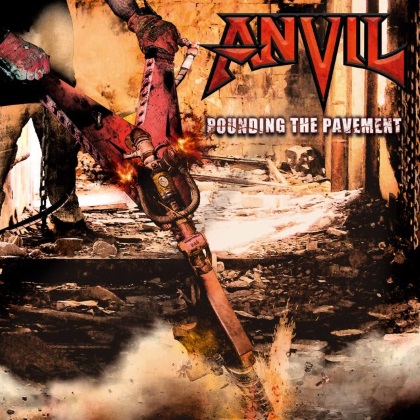 ANVIL: the band you love to love.

Whatever Steve"Lips"Kudlow and Robb Reiner hoped to achieve for themselves with their heartfelt, quasi-documentary film "Anvil! The Story of Anvil", it can't have put them in any better position. These Canadian working stiffs have given it their all to make an impact following their lauded film with an accompanying book, festival gigs and television appearances. Sadly, the sales numbers of the band's subsequent album, "This Is Thirteen", were telling of how hard it is to make a living at this gig, even if you carry veteran status.

With bassist Chris Robertson still hanging around, ANVIL drops its 17th slab, "Pounding the Pavement". If you're an ANVIL fan, you know the cheese of a Flying V jackhammer on this album's cover is simply staying true to the group's long-running shtick. Just roll through the equally nutty embodiments of skull-crushing Acme irons on "Plugged in Permanent", "Absolutely No Alternative", "Worth the Weight" and, of course, "Metal On Metal".

The cool thing about "Pounding The Pavement", however, is it's one of ANVIL's best albums in recent years. Coming upon four decades in the life, the group no longer gives a damn about making a run at widespread acceptance. There's a cleaned-up clout to this album bowing to the band's early years, hammered out with finessed, often speedy frustration on "Ego", "Let It Go", "Black Smoke", "Warming Up" and the rumbling instrumental title track.

The massive anthem "Doing What I Want" sums up ANVIL's understandable attitude, dropping a satisfying, boisterous album loaded with on-the-surface trashy titles "Bitch in the Box", "Rock That Shit" and "Smash Your Face". Being around as long as these rowdies have, however, there's refreshingly more beneath the surface. "Bitch in the Box", for example, rings as a vent about marital henpecking, but is actually a disguised tirade against computers.

The blues-rawking "Rock That Shit" is a giddy swing in the vein of MAMA'S BOYS and ROSE TATTOO with hilarious references to sock hops and "rock and roll meals". It's too confident in its own goofiness to dismiss, even with the lumbering dumb fun of "Nanook of the North" nattering upon its heels. Lips's gleeful solo here more than compensates for the mad crackers crumbled into the track. Hang tight with his narration, though, for "Nanook of the North" is actually a saber-toothed protest jam against irresponsible oil-drilling conglomerates. The doom slides of "World of Tomorrow" is a bit more obvious in theme, and its driving groove is only superseded by its lyrical conscience.

"Pounding the Pavement" is the album that would've done ANVIL a smidge more benefit following "Anvil! The Story of Anvil", since it shows how effective and resourceful this band can be. For longtime fans, it's a breath of fresh air, justification for a band that has recorded its own slogging ruts in exasperating intervals. This is the sound of ANVIL climbing out and rejoicing in its own oxygen.