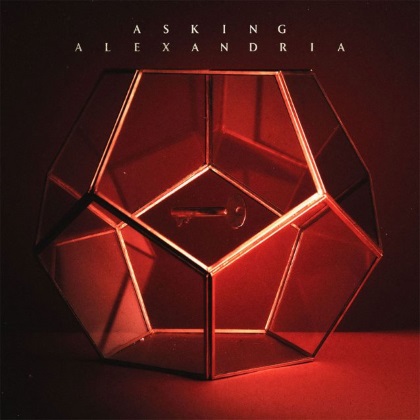 The UK has infiltrated American agro rock with the likes of BRING ME THE HORIZON, BULLET FOR MY VALENTINE, MY CHEMICAL ROMANCE and, of course, ASKING ALEXANDRIA. You can read broad itching from the British press ripping on the Americanized syndrome of their metalcore-plying countrymen and they have a point. It's getting dangerously generic as it's getting boisterous without a stance to push. Naturally, ASKING ALEXANDRIA fans would dismiss this as daft thinking as they celebrate the reunion of the band's creative forces Danny Worsnop and Ben Bruce for the band's self-titled fifth album.

Keep in mind, in the grand perspective, Worsnop departed the band for a blink of time with Denis Stoff briefly standing in from 2015 to '16. Yet a reportedly heated falling out with Stoff cleared the saddle for Worsnop, as ASKING ALEXANDRIA gets back to doing what it does. The group is unapologetically pop rock at heart, touting as much of an enduring love of H.I.M. as KILLSWITCH ENGAGE within its frequently fluffy songwriting.

To be fair, there's an undeniable grab to the bulky riffs and driving beat behind "Alone In a Room" and later, "Under Denver". You've heard the chord patterns in these cuts replicated ad nauseum by everyone from HALESTORM to Rachel Platten to Lady Gaga, but "Alone in a Room"does have a mighty enjoyable kick. Accordingly, "Under Denver" shoots for the stars and hits like a silver burst.

The album's lead single "Into The Fire" is a smidge darker and far noisier, if commonplace. The band's considerable legion will be all over this one, though, opening the door for peeyohed youth to yowl and screech alongside Danny Worsnop. They'll also geek trying to keep up with his tongue-twisting rap on "Where Did It Go"?

This being a band coddling its targeted demographic with a veteran charm beneath the band's would-be hefting, there's no argument that ASKING ALEXANDRIA doesn't play its head off for the group's audience. "Hopelessly Hopeful", "Rise Up", "When The Lights Come On" and "I Am One" are shoved huge with the same arena cajoling as "Hysteria"-era DEF LEPPARD. Different threads of heavy music from two differing generations, sure, yet the music is set for the high rafters, flinging spoonfuls of ear-pleasing saccharine like a bombastic candy man.

The writhing ballad "Vultures" is the best-written and most-compelling number on the album, while the follow-up, "Eve", is desperately annoying, tailored to jack decibels and split esophagi. "Eve" sadly gets lost in its own breakdown-choked wanderlust. Even more obnoxious is the huckstered pop rap squandering a good set of choruses on "Empire", prompting two words bearing more cred: THE STREETS. This is the kind of dismissible prefab you groan through during the televised New Year's Eve after party, the good that did over the long-term for LMFAO. At least Damon Albarn has had the good taste to delegate most of the rapping chores in his music to guests or samples.

ASKING ALEXANDRIA seems unstoppable, yes, but for the future of UK heavy rock, it's CREEPER that offers the most refreshing glimmer of hope.