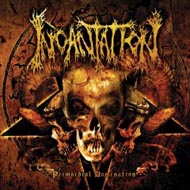 Bandwagons are not for a band like INCANTATION, neither is tech metal overkill or digitized studio wizardry. From day one guitarist/vocalist John McEntee has stayed true to his seminal band's brutal and doomy death metal, the kind of death metal in which feeling reigns supreme and pretentious posturing is kicked to the curb. After the now well-known ups and downs with record labels, including the demise of Olympic Recordings, McEntee went his own way and released "Primordial Domination" on his own, up and coming true death metal label Ibex Moon Records on this side of the Atlantic. (You death metal diehards really need to check releases from bands like ESTUARY, BLOODY SIGN, and DAWN OF AZAZEL). "Primordial Domination" will surprise no one, and that will suit the long time supporters just fine. If you're expecting a reinvention of the sound, a symphonic opus, or the incorporation of trendy new school elements, you've obviously not been paying attention over the years.

The follow-up to the equally strong "Decimate Christendom" is classic INCANTATION to the bone: sickening string bends, screeching pinch harmonics, Kyle Severn's natural/thunderous drumming, Joe Lombardarthy bass lines, and McEntee's increasingly confident old school vocals. The opening title track is a gnarly, driving instrumental that sets the tone splendidly and leads to the mostly up-tempo "The Fallen Priest". The mixture of disgustingly glorious dirges with speedier crunch is found throughout the album. The crush of "Hailed Babylon" ultimately gives way to naked and ominous string plucking before turning into a sorrowful belly crawl. Vintage INCANTION rhythmic gallops that subside only for moments of doom-laden misery appear on tracks like "Lead to Desolation", while "Doctrines of Reproach" and "The Stench of Crucifixion" feature some of McEntee's mostly sickening scream-growls. The aroma of spring flowers and sunny days has been buried six feet beneath the pure evilness of INCANTATION and replaced with the agonizing screams of religious leaders and the smell of a Christian civilization engulfed in flame. What else would you expect?

A few words about fourth member Bill Korecky are in order too. The engineer has gotten what is arguably the band's best sound to date. The guy has struck the perfect balance between instrument clarity and the dirty sound that is so important to INCANTATION's style.