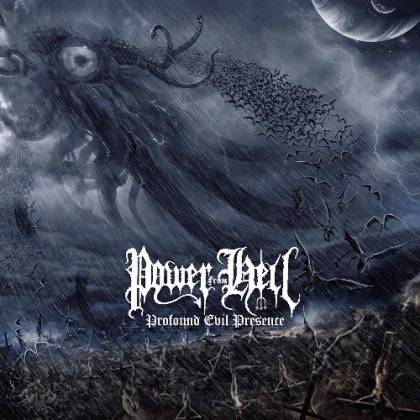 It is a well-established fact that South American metalheads go harder and with more psychotic passion than just about anyone else. Hailing from the hallowed metal breeding ground of Sao Paulo, Brazil, POWER FROM HELL have always been the living embodiment of that unique underground spirit. The band is not just named after a seminal ONSLAUGHT album — they are audibly imbued with its supremely aggressive and raw approach. They have consistently blurred the lines between gruff, old-school speed metal fury and a more twisted and blackened strain of sonic ugliness. But what they haven't done until now is make an album that expands that brutishly simple musical template. 2015's "Devil's Whorehouse" certainly hinted at a vague interest in progress, but not enough to prevent "Profound Evil Presence" from being one of the great metal revelations of 2019.

From its gloriously macabre and evocative artwork to the cinematic crackle of its opening intro, POWER FROM HELL's seventh full-length is a self-evident step up. Not that bands of this kind are ever likely to express a desire to achieve commercial success (and, in case you're panicking, this album will definitely not do that),but where previous records have been a mad-eyed explosion of grubbiness and lo-fi bite, "Profound Evil Presence" feels crafted, coherent and fluid, with atmosphere and depth to spare and an overriding sense that this band are worth a lot more than unwavering cult status.

Production-wise, this strikes a sublime balance between necrotic filth and bone-crunching heavy metal heft. The specter of early '90s black metal is omnipresent in the spidery riffs and primitive blasts, but while they still sound like shrieking demons from the depths of Hades, POWER FROM HELL have become noticeably more sophisticated and versatile and the proof is in the songs themselves; every one of them a stone-cold gravestone-smasher.

On an album that doesn't exactly struggle for peaks, "Lust...Sacrilege & Blood" and "Diabolical Witchcraft" are the immediate stand-outs: the former is a magnificently grandiose affair, despite its intrinsic nastiness, while the latter is a commanding display of eeriness and full-pelt, bile-belching blackness. But there are so many stunning moments here, from the vicious SLAYER-style tempo shift midway through "Unholy Dimension" to the wild blend of ghoulish menace and thunderous proto-death that makes "Elizabeth Needs Blood" such unsettling but thrilling hell-ride. As an added bonus, frontman Sodomic remains one of the most convincing and committed vocalists in the metal underground, his pitch-perfect barks and screams sustaining an all-important link to the glory days of VENOM and POSSESSED, but with more than enough of his own personality to make nihilistic tirades like "Into The Sabbath" resound with authenticity.

There will always be a place for the dirty DIY approach in extreme metal, and POWER FROM HELL have by no means abandoned their underground values here. But "Profound Evil Presence" is so much more than another tribute to the old school: herein lies real devilry, freakish ingenuity and some of the best infernal metal anthems you will hear this year. A colossal statement of intent from some hitherto unsung heroes, this is beyond essential for those who still feel the darkness.