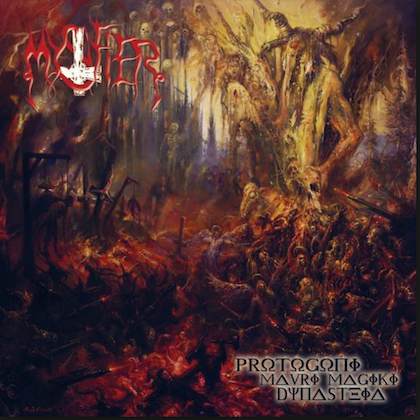 Brazil's bestial barbarians MYSTIFIER have been unwavering in the endless pursuit and exploration of extreme metal darkness for 30 years. Whether it's interesting or trivial depends on who you ask, but the act is arguably best known for its inclusion on the metalcentric soundtrack of Harmony Korine's ragtag-celebrating cult classic film "Gummo". Anecdotal bullet points aside, the South American noise merchants helped establish the continent on the global heavy metal scene—along with the likes of their countrymen in SARCOFAGO and SEPULTURA, and Peru's MORTEM—with their blackened death metal madness years before churches were burning and blood was spilling in Norway. MYSTIFIER now returns with its fifth album: "Protogoni Mavri Magiki Dynasteia".

The unit's early gems—the 1989 demo "Tormenting the Holy Trinity" or the subsequent early albums "Wicca" (1992),"Göetia" (1993) or "The World Is So Good That Who Made It Doesn't Live Here" (1996)—capture the essence of early Brazilian and South American metal: primitive, unhinged, rooted in both classic heavy metal as well as manic punk-fueled thrash. As such, MYSTIFIER is truly amongst the progenitors of the now en vogue, long-running war metal—or bestial black metal—subgenre. Fast forward to 2019, how can a band like MYSTIFIER remain relevant? Complete self-plagiarism of their earliest scripts would actually satiate a significant number of primitive metal worshippers, but it would be creatively fruitless. On the flip side, traveling too far from the early template would alienate their core fanbase as well as abandon the band's true identity.

With this in mind, an obvious challenge for a loose, gruff 'n' gritty band carrying forward decades into its career is that it will invariably grow, improve and develop in terms of musicianship and songwriting. MYSTIFIER succeeds with "Protogoni Mavri Magiki Dynasteia" because there's a tasteful balance between their growth and ambition, whilst retaining the primitive edge that's fundamental and inherent, ironically enough, to the archetype. On songs like the magnificently epic title cut or the blasting "Soultrap Sorcery of Vengeance"—both tracks enriched with some tasteful Middle Eastern inspired guitar licks—the Brazilians brilliantly strike a balance between a majestic heavy metal quality as well as a sonic assault that's coarse, vile and desirably not over polished. Some may scoff at the Southern blues-flavored, almost groove metal sounding riff predominant on "(Introcucione d'la Melodia Mortuoria) Thanatopraxy", which is genuinely good and somehow makes sense, or the awkward metalcore/deathcore breakdown midway through "Al Nakba (666 days of War)" , but pinpointing flaws on "Protogoni Mavri Magiki Dynasteia" ultimately proves to be a fool's errand.

MYSTIFIER has put out the best album that it's capable of releasing three decades into its career: a commendable feat, to be sure. A notable who's who of black metal peppers the album in terms of guest appearances, including Jim Mutilator (ex-ROTTING CHRIST and ex-VARATHRON) on the title track and ABSU's Proscriptor McGovern who crafted the intro for "Witching Lycanthropic Moon". But the band's leader is most deserving of acknowledgement. Flanked by relative newcomers Diego Do'Urden (bass, keyboards, vocals) and Eduardo"Warmonger"Amorim (drums),guitarist Beelzeebubth is MYSTIFIER's sole original member. Sure, maintaining a stable lineup hasn't been Beelzeebubth's forte, but an unyielding determination to continually march and wave the flag of dark metal glory most certainly has been.