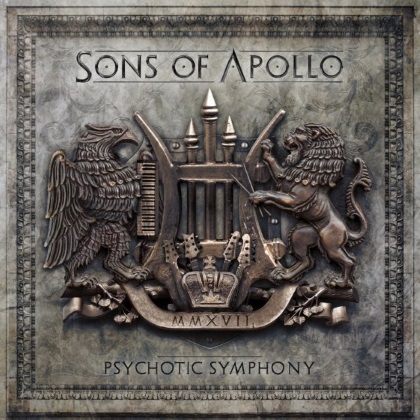 Since leaving DREAM THEATER seven years ago, Mike Portnoy has been remarkably prolific, having formed several supergroups (THE WINERY DOGS, FLYING COLORS, METAL ALLEGIANCE) while continuing to serve as Neal Morse's percussionist-in-crime on multiple albums and tours. In addition, he's toured extensively with TWISTED SISTER and AVENGED SEVENFOLD; he's recorded and performed with ADRENALINE MOB and TRANSATLANTIC, and earlier this year, he assembled a project called SHATTERED FORTRESS, which saw him revisit the DREAM THEATER catalog at select shows around the world.

SHATTERED FORTRESS marked Portnoy's unofficial return to progressive metal, which he's curiously avoided in recent years despite being one of its primary architects. Prior to the group's inception, the closest he came to the genre since splitting with DREAM THEATER was PSMS, a short-lived touring project with Billy Sheehan, Tony MacAlpine and his former DT bandmate Derek Sherinian, which primarily performed chops-heavy instrumentals from across its members' discographies.

With SONS OF APOLLO, his 2017 contribution to the supergroup pantheon, Portnoy finally fully re-embraces prog-metal. The group—which has gone to great lengths to emphasize that it's a "real band," not just a studio project—sees the drummer re-team with both Sheehan, with whom he also plays in THE WINERY DOGS, and Sherinian, a keyboardist with severe workaholic tendencies of his own. Since being unceremoniously dumped by DREAM THEATER in 1999, Sherinian has toured with the likes of Billy Idol, Yngwie Malmsteen and Zakk Wylde, and made four records with BLACK COUNTRY COMMUNION, three others with the heavy fusion group PLANET X and seven vastly underrated albums of his own. (Godspeed to anyone who tries to accurately diagram this band's family tree.)

Besides the obvious and inevitable DREAM THEATER comparisons, echoes of Sherinian's solo recordings and his work with PLANET X can be heard throughout "Psychotic Symphony", SONS OF APOLLO's compelling, if flawed, debut album. To be clear, the band, which is rounded out by former GUNS N' ROSES guitarist Ron "Bumblefoot"Thal and powerhouse vocalist Jeff Scott Soto (TALISMAN, SOTO, W.E.T.),has chops for miles, and it's hard to name a recent non-instrumental album featuring such stunning virtuosity.

So, what's the problem then? To paraphrase a quote from SKELETONWITCH, tunings aren't heavy: riffs are. Unfortunately, the guitars on "Psychotic Symphony" are tuned so low that the album at times treads dangerously close to, for lack of a better term, bro-metal, but then you're suddenly floored by a soaring chorus by Soto, a stunning flurry of notes by Thal (whose solos on this album should elevate him into the top tier of guitar heroes) or a dizzying instrumental passage, and the faux-aggression is forgiven.

Case in point: Initial preview track "Signs of the Time", which had the fitting working title of "Korntera". Opening with a plodding down-tuned riff, the song's percussive, monotone verses are forgettable, but it's saved by a memorable chorus and a midsection that gives Thal the chance to shred his Bumblefeet off for 30 scintillating seconds. (Pity the poor soul who ends up having to transcribe the guitar tabs.)

Far more consistent is the irresistible "Coming Home", the most commercial, melodic and accessible track on the album. Over the years, critics' most common knock against DREAM THEATER was that the band overemphasized musicianship at the expense of songwriting, but "Coming Home", which clocks in at a tidy 4:23, proves that the two can indeed coexist. In an alternate universe where grunge never happened, the song would be a surefire rock radio smash hit.

There are three other concise tracks on the album: "Divine Addiction", a kindred spirit of DEEP PURPLE's "Perfect Strangers", that should seal the deal for anyone who wasn't closed by "Coming Home"; the midtempo "Alive", which might also serve as an effective gateway drug (if not an in-concert breather); and the Portnoy foot workout "Lost In Oblivion", the nu-chug of which is redeemed by a hooky chorus, a blazing solo by Sherinian (who's clearly a guitarist trapped in a keyboardist's body) and some cool guitar/bass/keys tripling.

But this is a prog album, after all, and its three sprawling tracks that total a combined 31 minutes—which, though impressive, don't contain any jaw-droppingly epic moments to rival Sherinian's "Atlantis" trilogy or Portnoy's most exhilarating moments with LIQUID TENSION EXPERIMENT—will command the most scrutiny. Though not explicitly labeled as such, "God of The Sun" has a clear trilogy feel (not to mention, a similar vibe to DREAM THEATER's "Home"),but its three parts are so distinct that the song feels more goulashy than cohesive. Still, it should be a blast to watch the band play live, and, more importantly, it finally answers the question of what DREAM THEATER might sound like with a ballsier vocalist.

"Labyrinth", meanwhile, begins with a deliberate pace before shape-shifting three minutes in into something more polyrhythmic. A true kitchen-sink prog-metal track, it features a bass solo, a keys solo and a guitar solo, but Soto's driving vocals might be its most impressive component of all. Sadly, he's relegated to the sidelines on the album-closing instrumental tour de force "Opus Maximus", which features a strong PLANET X vibe while also recalling DREAM THEATER's epic finales such as "Octavarium". The song features a gnarly riff that's doubled by Thal and Sherinian and yet another eye-popping solo by the former, but with the group's front man MIA, it's somewhat of an awkward note to end on.

It takes a certain self-assured confidence—if not outright cockiness—to make a record like this, but perhaps such swagger is only possible after having already fought in the trenches together, as Portnoy and Sherinian did for five years in DREAM THEATER. That said, while "Psychotic Symphony" is a bold overture, it seems a safe bet that SONS OF APOLLO's next movement will shine even brighter.