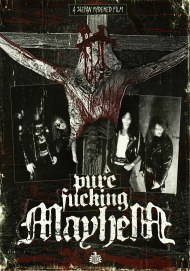 If you've not heard of the macabre tales of Norway's MAYHEM at one point or another, then chances are that you've either been living in a cave or have had only a fleeting interest in extreme metal. And if you're a black metal fan, then you've no doubt heard the stories of vocalist Dead's gruesome suicide, guitarist Euronymous' violent murder at the hands of BURZUM's Varg Vikernes, and the rash of church burnings that plagued Norway more times than you care to recount. It is the stuff of bizarre legend. Aside from those well known events though, there is the story of MAYHEM's position as one of the pioneers of what has become known as "true Norwegian black metal". On "Pure F*cking Mayhem" it is those tales from the 1984-1993 period that get most of the attention, sometimes at the expense of the finer points of the music created.

That said, the creators of the DVD make no bones about this emphasis on the events associated with the band and, quite frankly, it is an important part of black metal's history. The 90-minute documentary includes brief narration interspersed with interviews given primarily by Necrobutcher, Attila Csihar, Occultus, and Kittil Kittilsen, all of whom provide a thorough account of the band's history, including the years following 1993 up through the release of 2007's "Ordo Ad Chao", albeit in a more abbreviated, yet fairly effective, manner. It works just fine for those needing a primer on the seminal act. The views expressed by Kittilsen and Csihar are especially informative, the former's honesty especially refreshing.

While "Pure F*cking Mayhem" covers all the bases, the editing can be disjointed at times, mainly because of the marginally awkward shifts from narration to interview. Nothing about it is overly problematic, just not quite as professionally done as it could have been. Regardless, the DVD is a solid documentation of MAYHEM's history and the inclusion of an audio CD of eerie piano music inspired by the band and "other black metal classics" is a nice, unexpected touch.