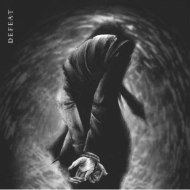 You have got to admire a band that kicks subtlety right in the balls and instead takes a musical approach akin to smacking someone in the mouth with board full of rusty nails. The band about which I write is ARMED FOR APOCALYPSE and the album is "Defeat", the debut disc for Ironclad Recordings.

Specifically, ARMED FOR APOCALYPSE play a bludgeoning, mainly slow to mid-tempo (emphasis on the latter),form of semi-groovy NOLA-inspired sludge metal with a bits of modern DM extremity and the occasional burst of high speed skullcrackery. Like EYEHATEGOD, the roots run deep into sludge territory, yet there is more involved here than the proverbial dragging of testicles across broken concrete. There is a DM brutality that rears its ugly head from time to time, as well as a somewhat more varied songwriting dynamic within which one can hear everyone from OUTLAW ORDER to DOWN to CROWBAR. "We Fell from the Bottom" and "The Demon Who Makes Trophies of Men" in particular mix those elements effectively, as the switch from quick romp to misery march on the former or the sudden/shocking shift to a neck-snapping pace during the last 30 seconds of the latter illustrate. Opting for unmitigated aggression and suffocating riff-blanketing over melodiousness and swing, songs like "Hero Complex" somehow remain purposeful and, even memorable, while making it nearly impossible to hang on to any semblance of hope for a better tomorrow.

That's kind of the point though, isn't it? On "Defeat" ARMED FOR APOCALYPSE do well to keep it real and rough, rather than succumbing to the overdone tendency of the new breed to mix and match in a manner more befitting the Hot Topic nation. And god love 'em for the super charged cover of DOWN's "Temptation's Wings" (the hidden track),a perfect choice that ensures deep bruising. Best when served warm with cheap whiskey and Pall Mall cigarettes.