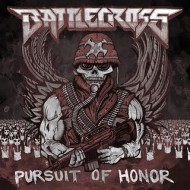 "You realize, you're wondering what's the burning that you smell?" was a line from classic cut "Lethal Tendencies" by former Metal Blade artists HALLOWS EVE way back in the decade of the '80s. What's that have to do with the price of olives in Turkey? Not much; just that Detroit's BATTLECROSS is part of a new generation of heavy thrashers on the Metal Blade roster. And that smell stinging your nostrils is coming from the series of raging infernos that is "Pursuit of Honor".

Screaming guitars, shrieking vocals, guttural punch, and melodic sensibility all wrapped up in big ole' bucket of Motor City metal ruckus is much of what's happening on the group's debut album. The basis is traditional thrash metal, but not in a retro wannabe sense, and is delivered in a package that is modern, yet avoids being too cookie-cutter; melodic, yet not "pretty" or cleanly sung. Often crossing into death metal heaviness and showing some compositional skill, "Pursuit of Honor" is above all else inanely energized. The weapons here are many, including a vocalist in Kyle "Gumby" Gunther whose scathing highs and brutal lows (think LAMB OF GOD's Randall Blythe) who pays attention to patterning and a pair of dangerous axe-swingers in Tony Asta and Hiran Deraniyagala that rip, shred, slice, and dice with psychotic abandon. Christ, even bassist Don Slater can't restrain himself; his solo during "Push Pull Destroy" a case in point, which is also one of several tunes that reveal some UNEARTH-isms (think "The Oncoming Storm") and a little SHADOWS FALL-style thrash. It's hard to tell what really went on at Bay City, Michigan's Random Awesome Recording Studio (in which the album was produced by the band and Josh Schroeder),but "Pursuit of Honor" came out of that place like a flame-engulfed meteor.

The proof in that pudding is all present and accounted for, BATTECROSS proving their worth as songwriters instead of just contract killers. In addition to the aforementioned standout "Push Pull Destroy", a fair bit of memory-etching continues right on through the final notes of outro "Foreshadowing". That includes furious galloper (with a speak-shout vocal changeup) "Kaleb", the "Kill 'Em All" riffing meets updated melodic pummel of "Rupture", and the epic/classy "Misery", the band's finest compositional moment on the album. There is room for refinement, but "Pursuit of Honor" is still dud-devoid. You'll mosh, you'll sweat, and you'll remember. Easily one of the better metal debuts of 2011, "Pursuit of Honor" will leave you breathless, maybe even skinless.