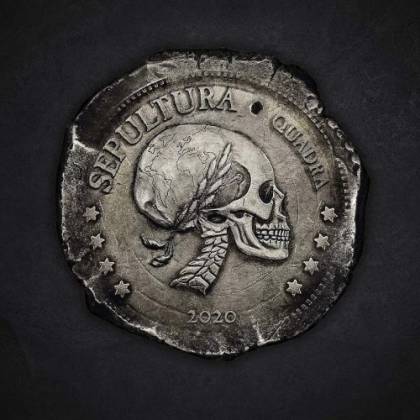 Heavy metal's atavistic instincts are undoubtedly among its finer qualities, but resistance to change can also lead to some major missing out. SEPULTURA have been making great records with frontman Derrick Green for well over two decades now, and while there will always be a small faction among the band's global fan base that will never accept the Brazilians without Max Cavalera at the helm, those people have been looking increasingly silly over the last few years in particular. Of course, if you weren't convinced by 2017's "Machine Messiah", then "Quadra" is unlikely to re-convert you to the cause, but just like its immediate predecessor, SEPULTURA's fifteenth studio album plainly and loudly showcases the sound of a band at the height of their powers, both in terms of creativity and musicianship.

Something clicked in the band when current drummer Eloy Casagrande was recruited: you could hear it on 2013's grim and brooding "The Mediator Between Head and Hands Must Be the Heart", but Ross Robinson's production was — not untypically — sufficiently swampy and off-kilter to alienate those expecting a repeat of the crisp and brutal "Kairos" from two years earlier. It was 2017's "Machine Messiah" that finally confirmed that Green, guitarist Andreas Kisser, bassist Paulo Jr. and their new percussive comrade had gelled in a way that veteran bands really aren't supposed to do. Vivid, versatile, wildly imaginative and full of great metal songs, it was widely praised and has hastened the band's ongoing steady rise back up festival bills. At this point, SEPULTURA are as in demand as they've been at any point since "Roots" in 1996, and given that their former colleagues are out there doing the album playthrough thing, well, it's not surprising that "Quadra" is a supremely confident and forward-thinking metal record, like "Machine Messiah", only more so.

Divided into four sections, in keeping with the album's title, and thematically focused on the notion of society's blind acceptance of predetermined ways of thinking and being, this is a cerebral and thoughtful affair that subtly taps into SEPULTURA's longstanding commitment to peace, love and unity. That said, the album's first quarter will absolutely rip your face off. Gleefully ripping through three of the most intense tracks they've ever recorded, this supposedly "classic" band sound more like speed-snorting teenagers, albeit with more than enough talent and charisma to end up toothless and scrawny. Opener "Isolation" you will already know: it's almost a potted manifesto for the Green era, as epic grandeur, heads down viciousness and vein-shredding hooks fly at you from all angles. "Means To An End" is even more gnarly, with bags of groove and swathes of dissonant scree that will loosen your fillings. "Last Time" is the best of the lot, with its full-pelt attack and mid-song drop into spooky RUSH-goes-goth territory: quite what else you might want from a modern metal song is, in the midst of this thrilling racket, a complete mystery.

The rest of the album takes us through every element of SEPULTURA's story so far, from the lolloping tribal swagger of part two's "Capital Enslavement" to the wonderfully inventive instrumental freak-outs of part three's "The Pentagram" and beyond, to the album's final flurry. Part four is where this most vibrant of old-school bands really stretch out, once again embracing a dash of pitch-black orchestral pomp on the simply stunning "Agony Of Defeat" — think MOONSPELL meets STRAPPING — and the baroque melodrama of anthemic closer "Fear; Pain; Chaos; Suffering". Throughout it all, Green's voice is a commanding and charismatic presence, while his comrades have never sounded more hell-bent on hammering their point home. We should thank our lucky metal stars that SEPULTURA stayed the course, because this is one of their finest records yet.