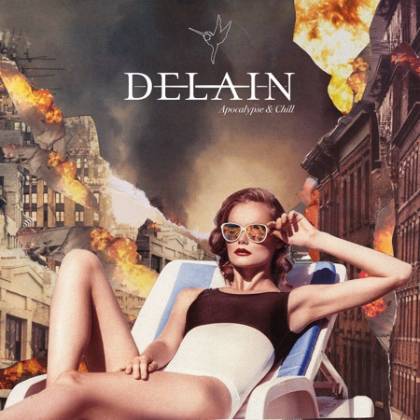 As much as DELAIN have established themselves as major players in the world of symphonic metal, it's never been particularly easy to pinpoint the band's primary USP. Neither as epic or progressive as NIGHTWISH nor as heavy as EPICA, they have certainly erred towards the more streamlined, pop-orientated approach of WITHIN TEMPTATION, but with a dash of LACUNA COIL's intermittent grit thrown in. All of which might suggest that DELAIN are rather straightforward and unremarkable, and yet "Apocalypse & Chill" is as dazzling and engrossing as anything else the genre has conjured in recent times. Weird, right?

One potential explanation is that while their elders and peers have evolved beyond their original formulas, DELAIN have had the good sense to stick with great songs, a sparkling, modern production and very little needless gimmickry. The band's sixth studio album does boast artwork that seems to imply a shift of aesthetic emphasis, but in reality, these songs are only subtly different from their predecessors. As always, Charlotte Wessels is the main attraction and the emotional core around which these immaculate micro-epics are constructed. Blessed with melodies and choruses as strong as the ones that power "We Had Everything", "To Live Is To Die" and "Creatures" dramatically along, she could hardly fail to enhance her reputation here, but it's equally true that she's never sung better. Her vocals on folksy ballad "Ghost House Heart" and the distinctly prog-inclined "Masters Of Destiny" are beautifully understated and sweet, but powerful too.

Ultimately, "Apocalypse & Chill" is the kind of record that casual observers would assume that every symphonic metal band is making, despite plenty of evidence that the genre has much more depth and diversity than that. What's really happening here is that DELAIN have upped their game in every department, eschewing cynical acts of musical shark-jumping in favor of aiming for the best and most powerful manifestation of a simple idea. Of course, there are subtle nods to other genres scattered throughout this deceptively diverse batch of songs, and the spirit of gleaming, 21st century pop is certainly in no hurry to leave. But bask in the grandiloquent clangor of "Legions Of The Lost" or the razor-sharp radio-metal mastery of "Burning Bridges" and the obvious conclusion is that DELAIN are really fucking good at this stuff and getting better all the time.