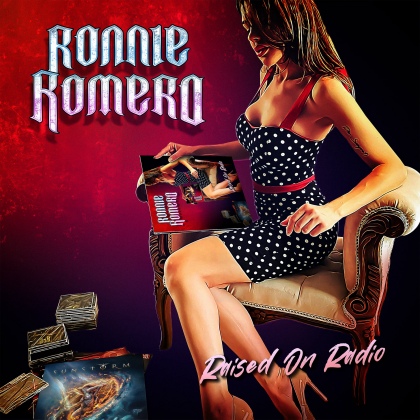 By this point, everybody should know who Ronnie Romero is. Arguably best known as the one man Ritchie Blackmore decreed fit to front his recent, RAINBOW-shaped return to amplified rock 'n' roll, Romero has been a perpetually charismatic presence in hard rock and heavy metal for the last decade. Currently vocalist with at least five bands, including the Spaniard's alma mater LORDS OF BLACK, and THE FERRYMEN, a collaboration with the ever prolific Magnus Karlsson. Everything Romero does oozes class, and that is largely because he has one of those imperious, undeniable classic rock voices: part Dio and part Freddie Mercury, but with plenty of the singer's own Iberian grit and soulful charm thrown in. When Ronnie Romero sings a song, it gets pinned to the wall. As a result, it makes a certain kind of skewed sense that his first solo album should be comprised entirely of covers. Great singer sings great songs. It's a winning formula.

Okay, so none of Romero's choices are going to cause anyone to spit their coffee out, but "Raised In Radio" is so sincere and well-executed that it hardly seems to matter. Kicking off with a rather good rendition of GRAND FUNK RAILROAD's "Sin's A Good Man's Brother", everything resounds with the singer's genuine love for the songs concerned and, as you might imagine, is sung with something approaching god-like brilliance. Thereafter, it's a simple matter of how much each revitalized gem hits the spot. The obvious highlights are a wonderfully graceful and classy take on Freddie Mercury's "I Was Born To Love You" and a lugubrious strut through ELF's "Carolina County Ball". Again, Romero's debt to Ronnie James Dio is taken as read, and it's hard to imagine anyone on Earth doing a better job of emulating the great man. Elsewhere, URIAH HEEP's "Gypsy" receives the gleaming, melodic metal treatment, FOREIGNER's "Girl On The Moon" showcases the AOR glint in Romero's eye, and "All Along The Watchtower" defies the odds by not being a carbon copy of either the cherished Hendrix version or the Bob Dylan original.

The final money shot arrives with a sweetly indulgent version of LED ZEPPELIN's "Since I've Been Loving You". As Romero proved when he was bellowing majestically through extended versions of "Mistreated" during those RAINBOW concerts, his voice is supremely powerful and more than a match for even the most exalted of ancient source material. Okay, so "Raised On Radio" is fairly inconsequential in the grand scheme of things, and Romero will doubtless make many records more vital and imaginative than this. But then that voice erupts and everything else melts away: Great singer sings great songs. Simple.