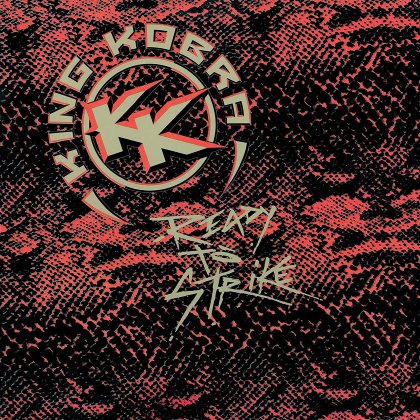 KING KOBRA had the world to gain and had it, almost. The band had drumming veteran Carmine Appice for a leader. It had an arsenal buffered by fleeting future stars: guitarist Mick Sweda in BULLETBOYS, bassist Johnny Rod in W.A.S.P. and guitarist David Michael-Phillips (aka David Henzerling) who later found himself running a full circuit of like-minded power rock acts such as KEEL, ICON, SCHOOLBOYS, BANG TANGO, TUNNEL and shock rocker, LIZZY BORDEN. Though it occurred after-the-fact, the group’s voice on mike emancipated herself from Mark to Marcie Free. At the end of the group’s sadly short first run, implosion and a failed attempt to court the mainstream saw the group dissolve by the time its 1988 third album was released. Then, in 2011, four-fifths of the lineup reunited for the oddly plotted "King Kobra" album: further underscoring KING KOBRA’s weird story.

Brought together before POISON and WARRANT ran to the bank as winners of the of the Big '80s hairball rock sweepstakes, KING KOBRA had a ton to offer. Fans of DOKKEN's "Tooth and Nail" automatically flocked to KING KOBRA's "Ready to Strike", a parallel sound between both records. In 1984 and '85 George Lynch was a superhuman guitar legend in the making. David Michael-Phillips and Mick Sweda together were no match, though highly formidable. "Ready to Strike" came a-calling with the same swaggering, melodic approach that caught on with many metalheads—until thrash changed everything.

Like ROUGH CUTT and KEEL, KING KOBRA was a second-tier power rock band yielding monster riffs, solid chops and plenty of drive. Like most of the boy glammers of the 1980s, KING KOBRA laminated themselves with Aqua Net and pink streaks in their monster coifs, but played like they'd enjoyed a few rounds of "Punch Out" from a Los Angeles arcade prior to hitting the studio. KING KOBRA did land a hit single with KICK AXE’s (a.k.a. SPECTRE GENERAL) song "Hunger". With this taste of success, KING KOBRA softened up (an understatement, to be sure) on "Thrill of a Lifetime", an album Gen X'ers might attest spins like the soundtrack to a cavalcade of every action, comedy and teen-angst film from the mid-‘80s. All but held at gunpoint to write big, catchy tunes, KING KOBRA's original fan base took off in the wake of the screaming jets the band serenaded behind the "Top Gun" rip-off "Iron Eagle".

Rock Candy Records, in partnership with KING KOBRA's first label, Capitol Records, have reissued "Ready to Strike" and "Thrill of a Lifetime". Two albums that are as alarmingly different from one another as ALCATRAZZ's "Disturbing the Peace" and "Dangerous Games". Today, "Thrill of a Lifetime" rings as a harmless, nostalgic guilty pleasure with its heaviest numbers stuffed at the very end behind gluey pop rock numbers like "Second Time Around", "Dream On", "Feel the Heat", "Only the Strong Will Survive" and "Iron Eagle (Never Say Die)". If you're daring enough to hang with it, the rap-rock number "Home Street Home" is a somewhat embarrassing answer to the implausible sensation RUN-D.M.C./AEROSMITH created with their tag of "Walk This Way". Only the hearty huffs of Mark Free sell what could've been a full-on disaster.

By contrast, "Ready to Strike" is dated, yet it still holds up well more than 30 years later. "Hunger" today continues to carry a pleasing power groove while the slamming succession of "Shadow Rider", "Shake Up", "Breakin' Out" and "Piece of the Rock" are funneled by Carmine Appice's vigorous rhythms. Far heavier on the guitars, naturally, this album doesn't let up for most of the ride until the checked down "Tough Guys". That one benefits from Johnny Rod's relaxed bass lines and Mark Free's elevated pipes. Still carrying a kick and a snazzy tag solo, the twinkling synths and bubbly choruses give preview as to where KING KOBRA would soon be heading.

"Attention" is a fast and rumbling answer to DOKKEN's "Turn On The Action" with perhaps a smidge more finesse. Carmine Appice's aggressive romping with double kicks, jazzy snare taps and cymbal dancing sets "Attention" upon a speedy course with huge riffs—this album is packed with them—tumbling right behind him.

"Dancing With Desire" was, in a sense, the surprise cut on an album largely focused upon one banging ditty after another. Acoustic-led with some of "Ready to Strike"'s finest harmonizing, harmonizing being another of the album's attributes, "Dancing With Desire" is wonderfully constructed and sung sensuously. It's a power ballad delivered with conviction and sensibility, not schmaltz. While there's a hint of the SCORPIONS sprinkled into "Dancing With Desire", KING KOBRA just might've scored a hit number or two before "Iron Eagle (Never Say Die)" had it been smarter pushed.

The pressure to go for the sure thing ironically ended up being KING KOBRA's biggest misstep. As corporate rock was looking for another SURVIVOR to match up to Hollywood blockbusters, since movie soundtracks of the '80s were big business, KING KOBRAdid come ready to answer that call. Unfortunately, this uber-harmonic shift alienated much of the band's cult following while Bret Michaels and company rode the same image all the way to MTV and the biggest arena party of the group’s time. A so-so anthem to a B action movie doesn't quite measure up to near-hourly television exposure—a shame, really, because KING KOBRA, in the beginning, was one to talk about back in the day.