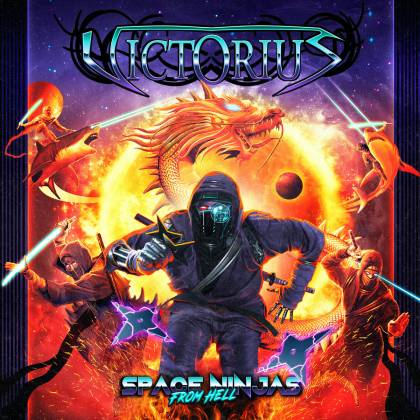 No one is going to accuse VICTORIUS of not putting enough effort in. The Germans' fifth studio album follows four relatively well-received efforts that have nudged them towards the front of the aspiring power metal pack, and you don't have to spend much time with "Space Ninjas From Hell" to realize that's it's a very purposeful bid to stand out from the crowd. Ultimately, nobody really needs power metal bands to be musically adventurous, this genre has always been about songs, slickness and exuberance. VICTORIUS are not going to win any awards for breaking new ground, but from its gloriously goofy artwork to the gleaming, state-of-the-art production, "Space Ninjas…" sounds like the work of a band with big ambitions and the energy to make it happen. Opener "Tale of the Sunbladers" and "Ninjas Unite" pretty much encapsulate everything that's on offer here: big, bold and bombastic, with soaring, overwrought melodies and intermittently furious tempos that will immediately make you think of DRAGONFORCE. Compare the two album covers for further confusion!

And therein lies the slight problem with "Space Ninjas From Hell". VICTORIUS are plainly a killer power metal band and heading for bigger and better things, but in both musical and visual terms, this whole project does almost exactly the same things that DRAGONFORCE did with "Extreme Power Metal" last year. You can play mix 'n' match with a lot of European power metal, let's face it, but the resemblance is frequent and occasionally a little alarming. That said, "Wasabi Warmachine" reveals a heavier, gnarlier and more symphonic edge to the VICTORIUS sound, and provides one of the album's most obvious highlights as a result.

At their best, VICTORIUS simply tap into that effervescent, infectious, high-energy power metal vibe that draws most of us toward the genre in the first place. The best songs here — "Super Sonic Samurai", the aforementioned "Wasabi Warmachine" — will have audiences in raptures, while even more generic moments exude a vibrant intensity that VICTORIUS would do well to harness and exploit. The only real downside is that song titles like "Astral Assassin Shark Attack" and "Evil WuShu Wizard Master" deserve to be attached to something a bit more wild and unpredictable than what is, in essence, an enjoyably explosive power metal record from an ambitious young band with some brilliant ideas, albeit most of them not their own.