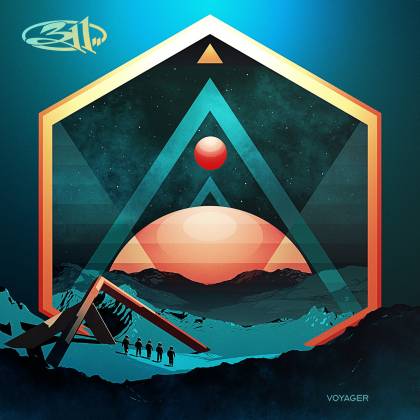 311 has been unfairly labelled nü-metal and/or rap rock because of its commercial explosion in the late nineties. Whether the aforementioned styles are regarded by one as complimentary or pejorative, the band is so much more. Granted, rap rock isn't a far-fetched genre-tagging pigeonhole, and their metallic edge does bring nü-metal to mind at times, but the collective has been massaging alt rock, hip hop, funk and reggae for more than a quarter century now. The multi-platinum outfit is responsible for writing ubiquitous hits such as "Amber", "All Mixed Up", "Down" and "Transistor". Following 2017's successful outing, "Mosaic", 311 returns now with its thirteenth long player: "Voyager", an effort that suggests that the act is one of the best in the active rock realm.

"Voyager" isn't exactly the most appropriate title for the album. The material doesn't deviate and travel through musical territory that's unfamiliar. The songs are simply the next steps along the existing trajectory. "Voyager" is a catchy mix of convincing tracks that should prove to anyone and everyone that the musicians on hand aren't merely "scene tourists" with regard to any of the styles they integrate into their whole. The album exhibits a familiar sound as that of its predecessor, "Mosaic", largely due to the carried forward co-production between longtime 311 engineer and producer Scotch Ralston and Grammy-nominated producer John Feldmann, who also happens to be the frontman of Cali punk rock band GOLDFINGER. Matan Zohar is also credited with production duties.

The reggae favor is obvious on opening number "Crossfire", and it certainly runs through the acoustic, singer-songwriter-styled "Dodging Raindrops". That common core element is threaded through the aptly entitled "Good Feeling", but one of many examples of 311's ever-present, up-beat nature that has always distinguished the act from the "woe is me" nü-metal bunch they've been excessively lumped in with. This isn't to say that they're afraid of making things heavy these days. While "Stainless" is primarily occupied by soothing, nearly ambient atmospheric soundscapes, they essentially serve as building blocks to reach a heavy guitar crunch that's married with impassioned hip-hop lines and rhymes. And Aaron "P-Nut" Wills, the ensemble's most talented member, spits out a funky bass groove that launches "Born to Live", and his fluid, low-end work tastefully punctuates the rest of the pop-driven song.

It's hard to believe that 311 has been around for decades. The gentlemen of 311 aren't exactly getting any younger, but there's somehow an enduring, youthful appeal to their music — reaching a younger demographic as well as the childlike spirit of listeners of any age. The unit's continued relevance, staying power and ongoing popularity is most likely attributable to a variety of factors. They remain tenacious. They tastefully blend a variety of popular music styles, and they perpetually employ an "if it ain't broke, don't fix it" approach to songwriting. As such, "Voyager" isn't anything unexpected. It is just everything that 311 followers want.