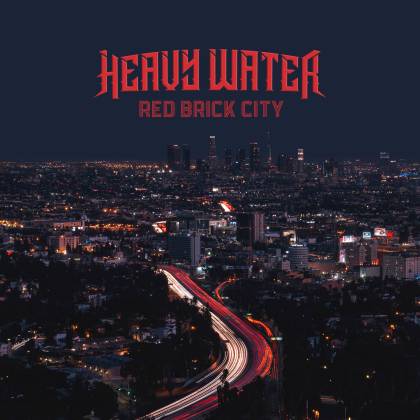 He has been such an integral part of the heavy metal furniture for so long now that it would be easy to forget what a brilliant singer Biff Byford is. As it turns out, his son Seb is a brilliant singer, too: as showcased on the first HEAVY WATER album, wherein father and son strip things down to a foundations-rattling hard rock format, with both men contributing vocals. In fact, it's Byford Junior whose voice dominates proceedings here, as Biff audibly relishes the opportunity to be singer and bassist, chipping in with his own telling vocal contributions and keeping things rock solid alongside drummer Tom Witts.

As with SAXON's recent "Inspirations" covers set, "Red Brick City" is very obviously the product of lockdown frustration, but there is nothing lightweight about these songs, nor anything frivolous or throwaway about its sound. Rooted in rock 'n' roll, and with much evidence that Seb Byford is a big grunge fan, songs like riff-driven opener "Solution" and the loose-limbed and dreamy "Tree in the Wind" make no attempt to mess with a winning formula, preferring instead to be unapologetic classic rock, delivered with considerable passion and grit.

Ultimately, the joy of "Red Brick City" is in the performances themselves, and the obvious delight that Biff and Seb are sharing here. As much as this is a record hewn from meat, potatoes and well-trodden sawdust, there are also detours into lilting, psychedelic rock ("Follow This Moment" is simply gorgeous),clanging hybrids of post-hardcore and STEREOPHONICS ("Personal Issue No.1") and even an insouciant, bluesy ballad ("Now I'm Home") that highlights a collective lightness of touch that, in truth, one might not generally anticipate from a SAXON side-project. If, indeed, this is a side-project, and not the beginning of something more enduring instead. Seb Byford's vocals are the biggest revelation of all, and it's his soulful, gravelly delivery that provides the album's most powerful moments. On the strutting funk rock of closer "Faith", he sounds so utterly at home as the band's focal point that it's hard to believe that he hasn't been doing this for as long as his road-battered and long-celebrated father. Meanwhile, Biff is having the time of his life, too. Absolutely nothing to dislike here, folks.