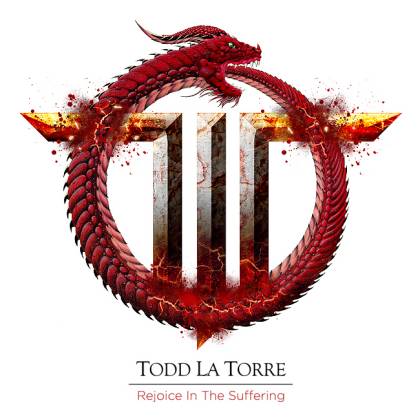 Rejoice In The Suffering

Todd La Torre's tenure as QUEENSRŸCHE's frontman has been one of the greatest joys in recent metal memory. Not content with revitalizing the prog metal giants, this absurdly talented multi-instrumentalist is now giving us the encumbered solo goods, thanks in part to the unwanted hiatus forced upon his thriving day job. Created in collaboration with fellow Floridian virtuoso Craig Blackwell and esteemed metal producer Zeuss, "Rejoice In The Suffering" kicks off with a great deal of urgency. It's almost as if La Torre had to make this album to stop his own skull from exploding. Opener "Dogmata" is all ripping trad metal riffs and soaring melodies, and noticeably more brutal than even QUEENSRŸCHE's heaviest moments.

In fact, the truth is that "Rejoice In The Suffering" is a purposefully straightforward and unapologetic melodic metal record. It's a style that suits La Torre's extraordinary vocal abilities perfectly, and with no compromises to be made on a compositional level, it's self-evident that everything here comes straight from the gut. It's ruthlessly precise and vicious stuff, however. Fans of VICIOUS RUMORS and "Jugulator"-era PRIEST will be in raptures when they encounter the likes of "Pretenders" and "Darkened Majesty" for the first time. These are traditional metal songs in every respect, but a combination of La Torre's effortless scaling of the octaves and an unwavering stream of incisive riffs ensures that "Rejoice…" feels classy, superior, perhaps even imperious.

With a voice like La Torre's, at least one towering ballad would seem an inevitability, and "Crossroads to Insanity" is as fine an example of the form as you'll hear this year. The meandering, dream-like "Apology" is even more absorbing, with slight shades of the 'RŸCHE mothership glimmering in the background, and another monumental vocal from the man himself. Elsewhere, "Vanguards of the Dawn Wall" takes off like a runaway thrash bulldozer, with La Torre in screeching demon mode and gang vocals thrown in for extra menace, while the title track is a dark and dystopian machine-metal juggernaut. Not every song sinks its talons in with quite the same ferocity, but "Rejoice In The Suffering" is still an unapologetic, balls-to-the-wind metal record, and a robust reminder that Todd La Torre is a one-man heavy metal whirlwind with one of the great voices of the modern era.