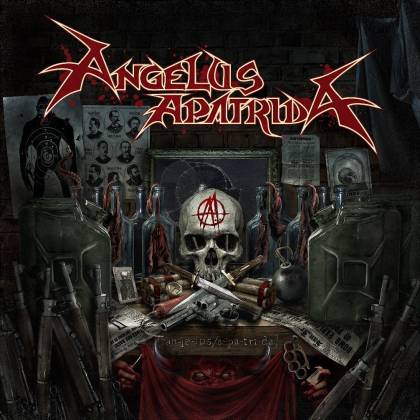 2020 was a phenomenal year for thrash, but this is no time for complacency. Someone needs to keep the wrecking ball spinning, and ANGELUS APATRIDA have kindly stepped up to the plate. The Spaniards have been cultivating a formidable reputation for the last 20 years, releasing a series of increasingly impressive records that deftly bridged the divide between old-school tropes and a more timely, progressive strain of extremity. Their last album, "Cabaret de la Guillotine" was an absolute beast and seemed to indicate that a more sophisticated and adventurous band was emerging. With that in mind, "Angelus Apatrida" is a big surprise: not because it lacks any of the intriguing details that made recent albums so enjoyable, but because this album is so utterly pissed off and gnarly that it feels more like a debut than a band's seventh full-length. For those who pine for the mosh-friendly days of the '90s groove metal explosion, "Angelus Apatrida" is manna from heaven, too. Although still firmly rooted in thrash, albeit of a fervently melodic strain, songs like breakneck opener "Indoctrinate" and "Bleed The Crown" indicate a laudable devotion to ageing classics by EXHORDER, PANTERA, SKINLAB and MACHINE HEAD, with maybe even a dash of PRONG thrown in for extra riff points.

Frontman Guillermo Izquierdo has stated that "Angelus Apatrida" is an album inspired by the deeply fucked-up world we find ourselves living in right now. Fittingly, he has never sounded more incensed or intense than he does on the balls-out likes of "Rise Or Fall" and "Childhood's End". The latter, in particular, is a thrilling riot of crossover velocity and muscular grooves: ANGELUS APATRIDA have been here before, of course, but they've never sounded as vital as they do now. A brilliantly ballsy production, replete with cranium-rattling bass tone, rolls back the years to the '90s, too, when bands actually strove to sound distinct from one another, rather than surrendering to the Pro-Tools swamp and dialing it all in from elsewhere. Whether it's the expansive, arena-goading stomp of "Through The Glass" or the machine-gun pummel of closer "Into The Well", the Spaniards' singular identity remains intact, it's just been stripped down to the bare, bloody bones and pumped up with self-righteous fury.

When the political shit hits the fan, thrash metal has always been on hand to speak truth to power. Or to put it another way, anger is still an energy and ANGELUS APATRIDA have used it to make their most compact, coherent and musically direct album to date. Their next move will be fascinating, but for now, this is precisely the kind of pulverizing wake-up call the world needs.