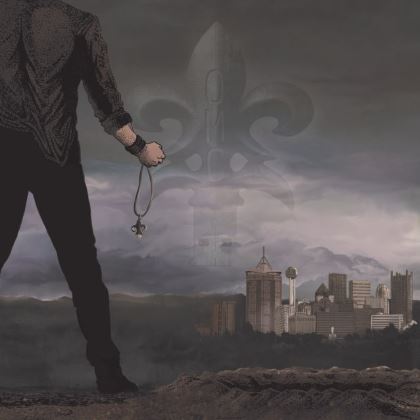 It's only incremental now, but four years since the initial rift, the verbal artillery continues to fly over the neutral ground enforced between Geoff Tate and his former bandmates. As grossly demeaning as this brawl has been for all participants involved, Tate has productively moved on from QUEENSRŸCHE. However, fans have viewed Tate's new band, operating as a unit under the moniker of his magnum opus, OPERATION: MINDCRIME, positively as it has proven to be far more than a vehicle to avoid further legal stress.

Last year, Tate and OPERATION: MINDCRIME, as much a full-on collective as a working unit, released "The Key", the first of a proposed album trilogy. Not so much a direct response to the second QUEENSRŸCHE album with Todd La Torre, "Condition Hüman", "The Key" was a rich and dynamic rebirth for Geoff Tate. If Tate proved anything, it was that he could move on from the scrutiny cast upon his maligned alter-brand QUEENSRŸCHE album "Frequency Unknown" and produce a winner. A little more than a year following "The Key", OPERATION: MINDCRIME releases part two of Tate's grand prog design, "Resurrection".

While not quite as initially salient as "The Key", OPERATION: MINDCRIME boils "Resurrection" as a slow cooker through snippets and prog nuggets, the instrumental "When All Falls Away" being a tremendous unveiling of this band's prowess. It takes all the way to track five for a full song to emerge, the moody rocker "Left for Dead" and the grumbly "Miles Away", before eventually sending the listener through a myriad of lush, six-plus minute prog affairs. The gratuitous lengths per song present golden opportunities for Tate's performers to shine, those include Kelly Gray, Brian Tichy, John Moyer, Simon Wright, Tim Fernley, Randy Gane and Scott Moughton. "Resurrection"'s guest list includes Tim "Ripper" Owens and Blaze Bayley, who contribute vocals to "Taking On The World".

The conceptual theme of "Resurrection" continues Geoff Tate's macrocosmic overview of political and monetarist corruption. All this as relative cloud cover for his inescapable bloodletting about the QUEENSRŸCHE division, which rolls as an entire succession, i.e. "Healing My Wounds", "The Fight", "Taking On The World", "Invincible" and "Which Side You're On".

While exhibiting smidgeons of weariness to his pipes in spots, Geoff Tate still commands his space convincingly, even if subtlety subdues overtness more often than not. Still, how the man's achieved so much under duress is impressive, and as "Resurrection" grows stronger, so too does Tate's vocals. "Healing My Wounds" is where "Resurrection" finds its proper footing and it is a powerful performance from OPERATION: MINDCRIME as a whole. Tate is as amazing on the mike as with his saxophone; equally striking is the extensive climax of reeling synths and breezy guitars.

While the sleepy tone of "The Fight" may ring of latter-day Tate-era QUEENSRŸCHE, the terrific power jam "Taking On The World" is the best of QUEENSRŸCHE when all were still getting along. Not that Tate blatantly rips off his old band here, but he turns this track into a bass-banging retro party for his diehards with Blaze Bayley and Tim"Ripper"Owens having a blast alongside him.

The 7:33 "Invincible", the 6:29 "A Smear Campaign" and the 7:18 "Into The Hands Of The World" tumble and crash tempo-wise, but the patient listener is rewarded by the album's true spectacle, one progressive escapade after another. OPERATION: MINDCRIME thus becomes somewhat less about Geoff Tate, who is there as both overseer and navigator. Tate turns his artists loose and lets them freestyle just enough to take these songs to places he's always seemed to want to go in the past and now has the freedom to visit. Sure, there are superfluous eccentricities to be indulged, and the largely trudging rhythms stand to be picked up more than they are, but the payoff is the grandiose finale, "Live From My Machine". It's a signal that Geoff Tate, well in the pocket and crooning sweetly amidst the hefty pound of synths and bass, hints at something wondrous in store with the third album.

What a cathartic moment that potentially stands to be.