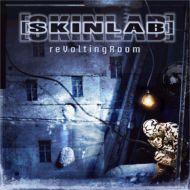 Once incorrectly dismissed as nothing more than second-rate MACHINE HEAD copyists, San Francisco Bay Area's SKINLAB have clearly been working hard at elevating the quality of their songwriting and establishing a relatively identifiable sound of their own, something that is especially evident on the group's third full-length CD.

Although SKINLAB haven't drastically altered the formula that made their first two albums such crushingly heavy releases in their own right, they have definitely made significant strides in streamlining their approach and placing greater emphasis on catchy choruses, as clearly apparent in virtually every song on the album, from the relentless brutality of "Slave The Way" (my personal favorite) to the effective dynamics of "Purify", one of the more adventurous tracks on the offer. By comparison, opener "Come Get It" features a fairly one-dimensional but utterly infectious groove that is somewhat different for SKINLAB, while "Disturbing The Art Of Expression" is a moody and unbelievably heavy number that contains an impressively versatile vocal performance from Steev Esquivel, who still stands as arguably one of the most fearsome-sounding singers in metal today.

Having initially attempted to mix the album under the guidance of producer Steve Evetts (i.e. SEPULTURA, EARTH CRISIS),SKINLAB wisely enlisted longtime collaborator Andy Sneap to give the album the kind of thick, crunchy feel that is consistent with the group's earlier efforts without compromising any of the band's increased musical accessibility—a combination that has easily resulted in SKINLAB's best-sounding CD to date.

Although SKINLAB shifted a respectable 50,000 units with their last full-length record, 1999's Disembody—The New Flesh, they are understandably hungry to take their band up a notch and get their hands on a piece of the success enjoyed by many of their less-deserving counterparts. Based on this advance CD, I can say with confidence that the group will go a lot further in achieving that goal than has thus far been the case.