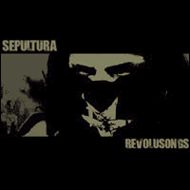 Ever since METALLICA popularized the concept of recording other artists' songs for use as either single B-sides or bonus tracks, cover songs in metal have been as commonplace as the CDs themselves — much to the dismay of the record-buying public, who have been subjected to some hideous attempts at other people's material over the years.

As a general rule, metal bands tend to be fairly conservative when it comes to covering other artists' songs, with the great majority of them choosing to record relatively faithful versions of the genre's classics — an idea as exciting as watching paint dry.

Recently freed from longtime label home Roadrunner Records, Brazil's SEPULTURA have opted to issue their own version of the "The 5.98 EP Garage Days Re-Revisited" EP (METALLICA's classic CD of covers, originally released in 1987) as a way of easing back into the public spotlight prior to the release of their next full-length effort.

Recorded last summer at a studio in Brazil under the watchful eye of producer Steve Evetts (who worked with the group on their final Roadrunner release, 2001's "Nation"),"Revolusongs" is an interesting collection of songs that range from the seemingly unlikely to the highly obvious. When it works, as is the case with U2's "Bullet The Blue Sky" and MASSIVE ATTACK's "Angel", the results are impressive and a pleasure to listen to, the group clearly benefiting from frontman Derrick Green's much-expanded range compared to that of his predecessor, Max Cavalera. By comparison, SEPULTURA's versions of JANE'S ADDICTION's "Mountain Song" and DEVO's "Mongoloid" — while enjoyable in their own right — are only marginally metallized versions of the originals that are performed competently enough to hold their own. Elsewhere, PUBLIC ENEMY's "Black Steel In The Hour Of Chaos", which stands as undoubtedly the most controversial choice on the offer, fails to generate much excitement with its one-dimensional groove and '80s rap vibe, while HELLHAMMER's "Messiah" and EXODUS' "Piranha" add little to the original versions and ultimately come across like the obligatory "old-school metal" selections designed to satisfy the group's longtime fan contingent.

It's hard to imagine "Revolusongs" being of interest to anyone but the most die-hard of SEPULTURA fans, the majority of whom have accepted the fact that the 2003 version of the group will likely never go back to the early thrash sounds that launched their collective careers. "Revolusongs", like the aforementioned "Nation", sees SEPULTURA struggling to push their sound forward while maintaining strong ties to their extreme metal roots, and as such, constitutes a worthy — if not exactly essential — addition to the band's ever-increasing repertoire.