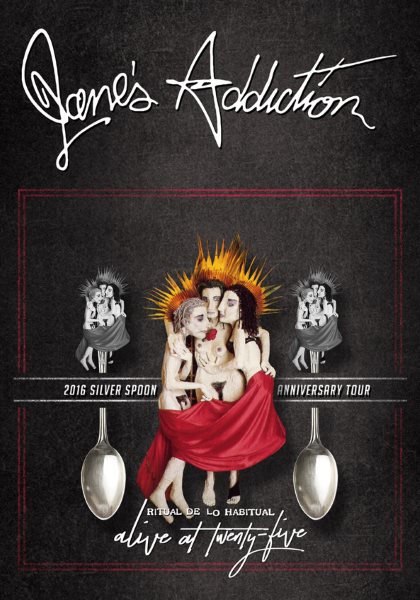 As a prelude to the band's new live anniversary package, "Ritual de lo Habitual: Alive at 25", Perry Farrell speaks of JANE'S ADDICTION playing at a crazed tilt in 1991. He equates the experience viscerally to a pair of boxers not merely dancing and baiting, but going full throttle, in one another's faces and those of everyone absorbing their slugfest. The potential stuff of legend, moments, as Farrell conveys it, that make you reminisce with privilege years later about having been there.

Don't look now Generation Y, but you're rapidly assimilating into the nostalgic ranks of those before you. PEARL JAM, CREED and COLLECTIVE SOUL are creeping onto classic rock radio, and, get this, CNN gave the 1990s its own retrospective miniseries. Your kids are wearing your old Lollapalooza shirts, and now-vintage Nickelodeon cartoons—you know, the ones that aren't Spongebob—are springing back in DVD reissue. Welcome aboard the fossil train.

At the same time, there's something magnificent in celebrating 25 years of a game-changing album, never mind that JANE'S ADDICTION had already rattled and rendered the rock world with "Nothing's Shocking" prior to. The men stepping onto the stage of California's Irvine Meadows Amphitheatre—site of the band's first gig opening for SOCIAL DISTORTION and X in 1987, then later launching the inaugural Lollapalooza festival—today are different, as Perry Farrell explained almost apologetically to his audience a year ago.

"Ritual de lo Habitual: Alive at 25" is a silver commemoration and full live presentation of the funky, hazy, swoony, bombastic and meditative "Ritual de lo Habitual". It's still a necessary and vital album, one that ignited a festering American rock scene. This 2016 remembrance may not be as historically significant to music (one reason, the missing Eric Avery),but it is a triumph for JANE'S ADDICTION after slowly working its motors to chock-a-block pop.

As the band takes its final stroll through Irving Meadows (to paraphrase Farrell),the initial vibe though the first three songs—"Stop!" "No One's Leaving" and "Ain't No Right"—is nearly passive. The tempos are all played a click behind as the dapper Farrell (clad in a snug suit, straw hat and ascot) slinks, shuffles and drawls instead of reverting to old berserker modes. Dave Navarro plays his guts out like he always does, while Steven Perkins and Chris Chaney seek to bluster the crawling rhythms while avoiding a total blowout of Farrell. In a way, this becomes a strange game of stage tag, while a gang of dancers cajole around the stage, looking to generate some heat flagrantly missing from the normally hectic and exuberant "Ain't No Right".

Yet Farrell's aloof candor dreamily plays right into "Obvious"'s mid-tempo calypso hands, and this is where the set takes life. The band finds its happy spot, and the members pick it up in tandem on the band's calling card single, "Been Caught Stealing". Here it drops some heft and shuck, along with glittery pyro, into it with the reps on the line. Farrell likewise catches fire and drops to the crowd, peeling off genuine smiles for a gaggle of cell cameras, futuristic gadgets that weren't there to greet him 25 years ago.

You get the sense JANE'S ADDICTION was always proudest of the second half of "Ritual de lo Habitual", as well it should be. The group's fullest reserves go into the remainder of the set, beginning with a spectacular rendition of its masterpiece, "Three Days". It's a beautiful performance with the dancers writhing translucently, Chris Chaney dropping those momentous bass lines with precision and Dave Navarro coaxing everyone, including his bandmates, into a trance. FOO FIGHTERS drummer Taylor Hawkins leaps out of nowhere to assist Steven Perkins on the tribal clubbing section, leading to the explosive, 10-minute sprawling climax, which contains every lick a true fan would expect from it.

Equally gorgeous is "Then She Did... ", which is not so much faithful but religious. Perry Farrell reminisces about fires on the hill set by fans at the first Lollapalooza, the tie-in story is as much a reverie as the tides behind him. He swims so deeply at this point of the song, he slowly pirouettes his sequined shoes into the worming klezmer-based tango, "Of Course". To complete the album exposition, the dancers, one is blindfolded, execute a tasteful, undress and redress striptease during "Classic Girl".

Dave Navarro saves his full animation for the post "Ritual" numbers, whirling around excitedly during the riff monster "Mountain Song", while Perry Farrell succumbs to its electrifying charge, shimmying and spasming like the old days. Taking the group's show to another level, two of the dancers are swung atop the stage, displaying impressive ab strength, during a kickass, shred-filled romp through "Ted, Just Admit It". As expected, the show concludes with a pretty saunter through "Jane Says", complete with steel drum and conga. The unit gracefully frolicking through what could've been Gen Y's defining anthem had PEARL JAM never come along.

In all, "Ritual de lo Habitual: Alive at 25" is well worth the ride, particularly if you missed the live show, as I did, back in the day. The band is in tremendous shape and they choose the most cathartic moments of "Ritual" with which to deliver the most impact. "Three Days" being the best DOORS-punk hybrid anyone ever attempted, it's still a marvel a quarter century later, as are JANE'S ADDICTION themselves.