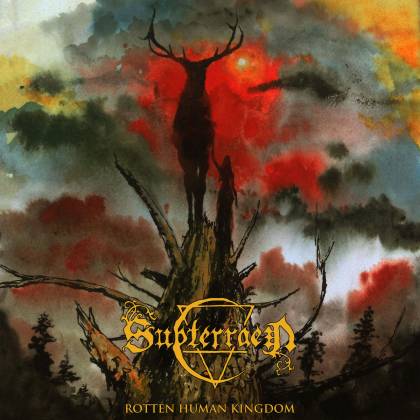 01. Blood for the Blood Gods
02. For a Fistful of Silver
03. Oceans are Rising
04. Wrath of a Downtrodden Planet

Many fans of heavy shit use the slowest, most miserable music as a straightforward form of catharsis. This has been a unique year, as some of you may have noticed, and so for once it feels perfectly appropriate to succumb entirely to the viscous tsunami of woe that SUBTERRAEN have conjured on their full-length debut. This shadowy French collective channel bitterness and dismay in a way that few can match with any conviction, and while "Rotten Human Kingdom" sticks rigidly to its prescribed sonic path, it is just so overwhelmingly disgusting and grim that anything other than total surrender seems like a missed opportunity.

A crippling, lava-flow of bilious sludge, "Blood for the Blood Gods" is not so much an opening track as a portal into hell. SUBTERRAEN are clearly avowed devotees of a certain breed of nihilistic doom, but the best ideas are always worth repeating and the Frenchmen slither over familiar ground with plenty of subversive flair to justify it all. Whether accompanied by its suitably mind-mangling video or not, "For a Fistful of Silver" is a vivid and punishing tumult of sluggish riffs and hair-raising hostility. When it does start to mutate and grow in depth and color, the band's unrepentantly bleak outlook still prevails, resulting in some new and deliciously twisted form of psychedelia, wherein guzzling hallucinogenics leads to a blissful, blank-eyed dive into the abyss. Not an unappealing option at this point, let's face it. Weirdly, SUBTERRAEN are capable of moments of beauty, too: interlude "Oceans Are Rising" is a swoon-inducing miasma of underwater arpeggios. Admittedly, it's only one brief moment of respite — the rest will grind your soul into the floor.

The closing "Wrath of a Downtrodden Planet" is the heaviest, slowest and most excruciating of the lot, with some prime, post-SABBATH riffs delivered at a smacked-out, snail's crawl, drowning in acres of spectral echo and cave-bound clangor. The blastbeats that erupt towards the song's exacting conclusion are more ghostly than aggressive; a final flurry of fists, knives and shattered teeth, as hope is extinguished and humanity circles the plughole at gathering speed. As ever, the might of The Riff crushes all before it.

Fans of the slow and the heavy won't find any wheels being re-invented here, but on this evidence, SUBTERRAEN can confidently march straight to the front of the infernal post-metal/sludge/doom queue and await further instructions from the Omnipotent Goatlord.