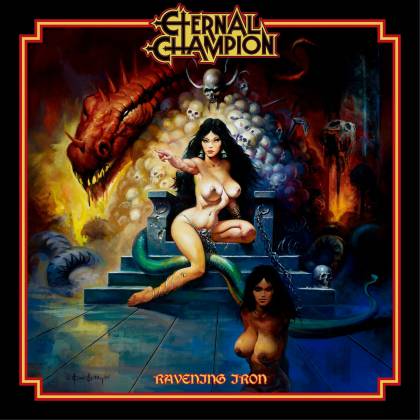 ETERNAL CHAMPION may honestly be the platonic ideal of what, on a basic level, heavy metal should sound like. In a modern heavy metal field that is increasingly crowded with bands paying tribute to tried-and-true sounds, the group crafts songs that are lean and streamlined, not coming off as regurgitated hero worship or comically over-the-top parody. The band's lyrical content is anchored in fantasy and Dungeons & Dragons imagery, but the riffs are grounded in heaviness. And here, every song comes out of the gate swinging with heavyweight force and zero wasted motion. The group's latest record "Ravening Iron" is only their second full-length and their first in four years, but ETERNAL CHAMPION already feels like one of the world's most confident bands.

The album begins with a straight-up ripper, as "A Face in the Glare" wastes very little time in bombarding the listener with a fast-paced thrash groove and a dizzying guitar solo. Guitar duties on this record are shared by John Powers and Arthur Rizk (who also provides heavy power behind the drum kit) and every riff and note is delivered with a calculated brute force. The raw energy driving ETERNAL CHAMPION's sound channels the same vibe as Texas thrashers POWER TRIP, though the overall aesthetic of the band stomps down a different path. Vocalist Jason Tarpey is a commanding presence behind the microphone, delivering his beckoning calls for swinging swords on the battlefield in a manner similar to some of the more subdued moments from OZZY OSBOURNE's '80s output.

This balance of heavy metal triumph with subdued force serves ETERNAL CHAMPION well throughout the record. The album's title track is another faster-paced thrasher, and even as Tarpey shouts about "thousands of swords" and that "no one can take them from me", while the song crescendos with anthemic "woah!" chants and metallic synths — additional work that is also shared by Powers and Rizk — the pure energy of their delivery keeps the song grounded in a furious headbanging groove. The majority of "Ravening Iron" continues along these lines, though even the tracks that divert slightly, such as the "Heaven and Hell"-evoking stomp of "Skullseeker" and the discordant midtempo crunch of "Coward's Keep", still deliver the power and triumph in spades. Alongside the aforementioned performances, bassist Brad Raub also makes an impressive debut by delivering extra rumble to complement the band's gallop.

The band's production remains grounded in grit despite its rather-lofty lyrical ambitions, and is likely a byproduct of Arthur Rizk's membership. Rizk's name has become commonplace within the credits of dozens of metal albums over the last decade, thanks to his production, mastering and mixing work for acts such as POWER TRIP, CIRITH UNGOL, TOMB MOLD and PRIMITIVE MAN, to name a few. Every record he puts his fingers on is known for having sonic clarity without being overly glossy or processed and maintaining a "captured live" aura. This surely is helpful in keeping ETERNAL CHAMPION from becoming another pretender to the throne.

Dozens of bands are paying tribute to the sounds that have been sitting on record shelves for decades, but few are capable of generating a din worthy of being slipped within those collections alongside the vaunted classics. ETERNAL CHAMPION came damn close to that on their 2016 full-length debut, "The Armor of Ire", and have attained that worthy status just one album later with "Ravening Iron".